The golden master version of iOS 11 appears to have leaked this evening, shedding some early light on products and features Apple plans to announce next Tuesday. The golden master software seems to have been sent to multiple sites including MacRumors and 9to5Mac.

In the Apple Watch app, there's an image of what may be the third-generation Apple Watch with a cellular connection. The device has the same general design as the current Apple Watch, featuring a Space Gray body and matching band, but it appears to have a bright red Digital Crown. Code in the update suggests the Apple Watch will be able to make calls over LTE, sharing a phone number with the iPhone. The Apple Watch will be added to an existing phone plan, and there are hints that carriers will offer pricing promotions. 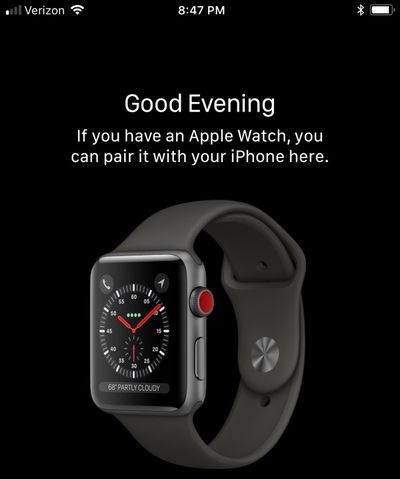 As noted by 9to5Mac, there are references to Face ID, which may be the name of the new facial recognition system in the iPhone 8, and there are images that feature the design of the iPhone 8 with slim bezels and a notch at the top of the device for the camera. The display of the device may feature True Tone support much like the iPad Pro, a feature that has been previously rumored.

Two iPhone 8 screenshots buried within the update give us a look at the new navigation bar on the iPhone 8, which will replace the Home button with a set of gestures. Pulling upwards on the bar brings up the Home screen and a longer pull brings up the App Switcher. There are also hints that the elongated sleep/sleep wake button (now called side button) will activate Siri and bring up Apple Pay cards and passes.

There appears to be a new "Portrait Lighting" feature that may work with the flash on the device, offering up Contour Light, Natural Light, Stage Light, Stage Light Mono, and Studio Light, and there are new video recording options:

There are hints of animated emoji for iMessage and references to AirPods 1,2, which may be a revised version of the wire-free headphones Apple first introduced last year.

Last but not least, there are a selection of colorful new wallpapers that are sure to look impressive on an OLED display. There are stills of the earth and moon, several floral images, a selection of retro-style rainbow wallpapers, and one wallpaper that's plain black.

With the iOS 11 firmware released early, it's likely there will be additional discoveries about the unreleased iPhone 8 and the third-generation Apple Watch over the weekend. Apple will officially unveil the new devices at its Tuesday event set to be held at 10:00 a.m. Pacific Time.

WinterWolf90
Jesus those wallpapers are horrible.
Score: 99 Votes (Like | Disagree)

iOS had a headphone jack?
Score: 69 Votes (Like | Disagree)

Gramps, time to get wireless earbuds and ditch old apps that are no longer updated.
Score: 46 Votes (Like | Disagree)

macduke
This is what the Face ID setup animated icon looks like. Presumably you look around at different angles during setup so that it can register your face in three dimensions.

ani4ani
This site is hopeless....I come here for rumours and fantasy about Apple and all I get are cold hard facts /s
Score: 39 Votes (Like | Disagree)

lol which one of those things would give iOS more "soul"
Score: 38 Votes (Like | Disagree)
Read All Comments