Facial recognition has been rumored to be replacing Touch ID entirely on the OLED iPhone X, and today developer Guilherme Rambo shared a few glimpses into the setup process of the all-new "Face ID" feature.

Rambo tweeted the settings and preference screen for Face ID, where you can choose to use Face ID for iPhone Unlock, iTunes and App Store, and Safari Autofill. Apple Pay is missing from the page, but Rambo noted that it's most likely because he's using a Brazilian Apple ID and Apple Pay isn't available in Brazil. 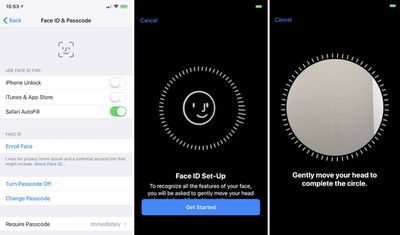 Once you tap "Enroll Face," iOS will ask you to gently move your head around in various directions and as you do a piece of the user interface will respond by filling in a circle surrounding your face. Once the scan is complete, your face will be enrolled in Apple's new biometric security software and will be able to unlock the iPhone X, authenticate the purchase of apps, and more.

In another video, Rambo recorded a separate piece of UI related to Face ID that he described as "authenticating with Face ID." This is expected to be another step in Face ID's setup process, but Rambo pointed out that he's "not sure" there will be a camera preview in the final version of the software. He did say that the smiley face glyph and rotating sphere animation will be parts of Face ID to some extent.

Authenticating with FaceID looks like this (timing not correct because it's just the UI, not actual auth) pic.twitter.com/kvNUARDQBJ — Guilherme Rambo (@_inside) September 9, 2017

In a series of leaks related to the HomePod firmware that happened earlier in August, a few strings of code suggested that the iPhone X will be able to scan your face even when the device is lying flat on a table. Apple is preparing Face ID to be "quicker, more secure, and more accurate than Touch ID," according to Mark Gurman, and the biometric security feature is expected to be one of the flagship features focused on during the September 12 event keynote.
[ 451 comments ]

big-ted
How do I stop the police getting me to unlock my phone, currently if I use the wrong finger enough times it needs a passcode which I have forgotten, I can't change my face while the police have me in restraint
Score: 55 Votes (Like | Disagree)

itsthenewdc
I really hope TouchID isn't missing completely. There's no way this is better, nor does it look like it can be faster what so ever. Plus, it seems like more of a battery drain having to "run" the camera to check.
Score: 39 Votes (Like | Disagree)

How do I stop the police getting me to unlock my phone, currently if I use the wrong finger enough times it needs a passcode which I have forgotten, I can't change my face while the police have me in restraint

In the US, your face will be unrecognizable by the time the popo are done with you.
Score: 32 Votes (Like | Disagree)

This is how we get reduced security. People will go back to no passcode instead. FaceID is solving a nonexistant problem.

People are going to be unlocking this thing with pictures within 24 hours.

Have you not been following the rumours? Do you honestly think that Apple will let a photo unlock the phone? It boggles my mind how people think that Apple hasn't thought of obvious simple things such as this. It's called 'advanced' facial recognition for a reason. Samsung this isn't.
Score: 22 Votes (Like | Disagree)

You can always opt to not set up Face ID and use a passcode instead while continuing to enjoy all the other features of iPhone X. Just because the feature is there it doesn’t mean you have to make use of it if you’re concerned over this type of issue.

This is how we get reduced security. People will go back to no passcode instead. FaceID is solving a nonexistant problem.

People are going to be unlocking this thing with pictures within 24 hours.
Score: 19 Votes (Like | Disagree)

canadianreader
This is truly the biggest leak ever
Score: 18 Votes (Like | Disagree)
Read All Comments