As its hunt for original television and film content heats up, Apple is now reportedly looking to land film distribution rights to the James Bond film franchise (via The Hollywood Reporter). Warner Bros. is said to be the front contender, but Apple and fellow tech company Amazon are both in "hot pursuit" of the spy series.

Sony's distribution rights for James Bond films ended with the release of the latest entry, 2015's Spectre, leading to multiple studios and companies vying for the rights. Sources close to the deal said that Apple and Amazon are willing to spend "in the same ballpark" as Warner Bros, "if not much more," in order to beef up their respective streaming businesses. Besides these companies, Universal and Fox are also pursuing the rights to the franchise. 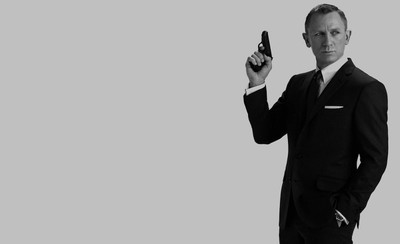 Daniel Craig as James Bond via 007.com
The deal is said to include the streaming rights to the entire James Bond film back catalogue, and potentially even "the future of the franchise." In recent James Bond news, Daniel Craig confirmed he'll be back to play the titular character in future movies.


But the emergence of Apple — which is considered such a viable competitor that Warners is now pressing MGM hard to close a deal — and Amazon shows that the digital giants consider Bond one of the last untapped brands (like a Marvel, Pixar or Lucasfilm) that could act as a game-changer in the content space. Apple’s and Amazon’s inclusion in the chase would indicate that more is on the table than film rights, including the future of the franchise if MGM will sell or license out for the right price.

Newly hired Apple executives Zack Van Amburg and Jamie Erlicht are said to be spearheading the effort to acquire the James Bond franchise on Apple's behalf. Those close to the deal estimate that the property could be worth somewhere between $2 billion and $5 billion.

The franchise does need something new. It is hilarious when the parody (Kingsmen) is more enjoyable than the original franchise.

I wouldn't call Kingsmen a parody at all. It was clearly written to stand on its own. However, I would call The Brothers Grimsby somewhat of a parody of Kingsmen.

Austin Powers, now that was a parody of Bond films.
Score: 14 Votes (Like | Disagree)

MartinAppleGuy
Should have went for Mission Impossible instead. Seeing them go to use Surface Pros as there only computers in Rogue Nation put me consistently on the edge of my seat waiting for them to rage quit and throw it like the NFL players did or have updates 1 of 300 installed haha
Score: 9 Votes (Like | Disagree)

JeffyTheQuik
I'm shaken, not stirred by this news.
Score: 8 Votes (Like | Disagree)
Read All Comments

Friday June 18, 2021 9:41 am PDT by Sami Fathi
After a long wait, YouTube for iOS is officially gaining picture-in-picture support, allowing all users, non-premium and premium subscribers, to close the YouTube app and continue watching their video in a small pop-up window. In a statement to MacRumors, YouTube says that picture-in-picture is currently rolling out to all premium subscribers on iOS and that a larger rollout to all US iOS...
Read Full Article • 188 comments

Friday June 18, 2021 6:59 am PDT by Sami Fathi
Apple supplier TSMC is preparing to produce 3nm chips in the second half of 2022, and in the coming months, the supplier will begin production of 4nm chips, according to a new report from DigiTimes. Apple had previously booked the initial capacity of TSMC's 4nm chip production for future Macs and more recently ordered TSMC to begin production of the A15 chip for the upcoming iPhone 13,...
Read Full Article • 158 comments