Monday August 21, 2017 2:42 pm PDT by Juli Clover
Shipping estimates for Apple's AirPods have improved to two to three weeks in many countries around the world, suggesting Apple is one step closer to achieving supply/demand balance for the much-desired earphones. 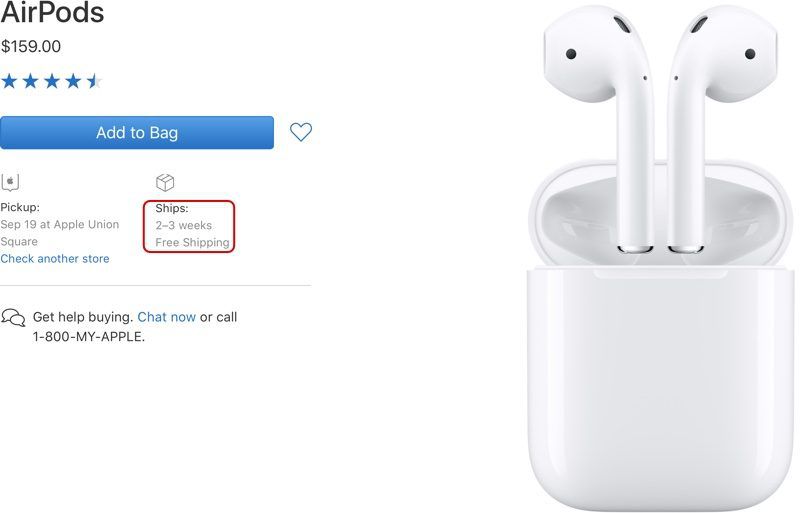 At the new 2 to 3 week estimate, customers can expect to receive AirPods ordered today in early September.

During Apple's third quarter earnings call, Apple CEO Tim Cook said AirPods capacity had been bumped up and that the company was "working very hard" to get AirPods to customers as quickly as possible.

While Apple's own stock has been in flux online, Apple retail stores have occasionally received stock and third-party retailers like Best Buy have been able to offer AirPods with quicker shipping on a regular basis.

Priced at $159, the wire-free AirPods have become a popular accessory largely due to Apple's W1 chip, which significantly improves the Bluetooth connection and facilitates simple and quick transfers between different devices. The AirPods are also equipped with infrared sensors to detect when they're in the ear, and they support touch-based gestures to activate Siri and perform other tasks.

Also, I'm not sure Apple would make any profit at $99. I know that will be poo-pooed by many, but there's actually a fair amount of technology in the AirPods and case.


And I believe a $169.00 price tag is not an unfair asking price in my opinion. The battery life, seamless technology with the W1 chip and pairing, decent audio quality and they are well made. Other competitors are significantly more expensive than the Airpods.
Rating: 7 Votes

Anybody use them for making phone calls? How is the quality?


The reason I purchased mine months ago was on the recommendation of another forum member (MH01) and that they worked great on phone calls.

After using mine for 6-7 months I can confirm that's the case. It makes speaking on my iPhone actually enjoyable. Sound quality is excellent in both directions. And being hands-free using my iPhone is killer. If I should lose mine (I won't), I'll quickly purchase another pair. And they stay securely in my ears in a variety of situations, including gym workouts.

AirPods are one of Apple's best products.
Rating: 7 Votes

jonnyb
I’d really like some in-ear AirPods. I love mine, but I’d love a pair with some noise isolation for wearing on the train. They could be exactly the same tech; they’re great as they are.
Rating: 6 Votes

WilliamG
I like the backup battery system for them, too. It accomplishes two things:

2.) If they keep falling out, this helps pump them back up so they maintain a snug fit in the ear.

Anybody use them for making phone calls? How is the quality?


It's one of my frequent use cases, especially at work. People on the other end of the call never have any idea I'm not holding the phone directly.
Rating: 5 Votes

dannyyankou
Hope they drop the price next month with the iPhone 8. I have a pair and love them, but if Apple wants to push them mainstream I think $99 is a magic number.
Rating: 5 Votes

Hope they drop the price next month with the iPhone 8. I have a pair and love them, but if Apple wants to push them mainstream I think $99 is a magic number.


There wouldn't be any logical reason for Apple to do this. They want to absorb as much profit as possible with the Airpods, especially given the demand and popularity. I imagine the only time we will see a discount is through third party retailers or a promotional discount.
Rating: 4 Votes


They sure are. Stock sells out in minutes. Shows what you know. What I can’t believe is people like you who insist on posting this drivel when clearly you haven’t a clue.
Rating: 4 Votes