AirPods Now Ship in 4 Weeks, Finally Down From 6 Weeks Estimate Since December

Apple has updated its online store today to indicate that AirPods are now estimated to ship in four weeks in the United States, Europe, and many other regions, down from a six-week estimate listed since launching in December. 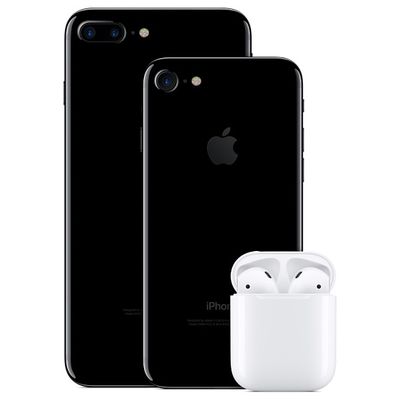 We're also seeing incredible enthusiasm for AirPods, with 98 percent customer satisfaction based on a Creative Strategies survey. We have increased production capacity for AirPods, and are working very hard to get them to customers as quickly as we can, but we are still not able to meet the strong level of demand.

In late December, a few weeks after AirPods launched, Cook said the wireless earphones had been "a runaway success," contributing to a "great holiday" season. Cook cheerfully noted that Apple is making them as fast as it can.

AirPods are Apple's first pair of truly wireless earphones. They instantly turn on and connect to your iPhone, Apple Watch, iPad, or Mac when taken out of their charging case, thanks to Apple's custom W1 chip. Likewise, audio automatically plays as soon as you put them in your ears and pauses when you take them out.

AirPods have received largely positive reviews, and they earned a 98 percent customer satisfaction rate in a recent Creative Strategies survey.

AirPods can be ordered on Apple's website for $159 in the United States. They're also frequently in stock at resellers such as AT&T and Verizon with delivery to most U.S. addresses in as little as 2-5 days.

Guys, are they really that good to still be this constrained?
I just don't see them as this big a deal.... hmmm

Yes, they are that good and in my opinion, and are game changers. If you haven't experienced them, you should. They are incredibly well made with excellent features and the battery life is outstanding. This was best purchase I made from Apple in 2016 over my devices from Apple.
Score: 31 Votes (Like | Disagree)

No joke, out of all of my Apple devices (incl the 2017 Macbook Pro touchbar) I like my AirPods the most.
Score: 22 Votes (Like | Disagree)

newyorksole
AirPods are fantastic. The size, the charging case, W1 chip, battery life, sound etc all make it such a great product.
Score: 21 Votes (Like | Disagree)

CausticSoda
This is one Apple product I am 100 % happy with - highly recommended!
Score: 21 Votes (Like | Disagree)

Guys, are they really that good to still be this constrained?
I just don't see them as this big a deal.... hmmm

Don't worry, some people have way too much money and time on their hands.

More like Apple made a great product that performs seamless with the iPhone. Furthermore, the competition is priced higher than the AirPods, and at a $160, the AirPods offers a lot of functionality.
Score: 14 Votes (Like | Disagree)
Read All Comments