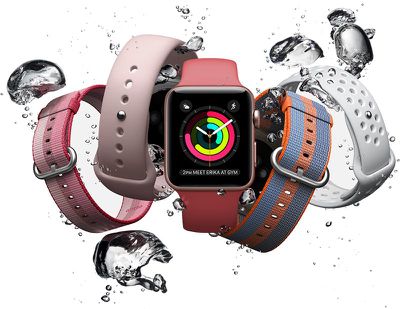 Apple Watch Series 2 models and slightly upgraded Series 1 models launched last September alongside the iPhone 7, so it's reasonable to assume that Series 3 models could launch this September as well. The original Apple Watch, now unofficially dubbed Series 0, launched in April 2015.

The rest of the report cites KGI Securities analyst Ming-Chi Kuo, who recently claimed Apple Watch Series 3 will be available in both Wi-Fi and Wi-Fi + LTE models in 38mm and 42mm sizes. Kuo said the cellular-enabled model will have an embedded SIM, but it might support VoIP calling only.

Apple Watch Series 3 models will also reportedly have improved performance and longer battery life, at least for the Wi-Fi-only version.

What's less certain is whether the Apple Watch will be significantly redesigned for the first time since being unveiled in September 2014.

"It could also be that both my birdie and Kuo are correct," said Gruber, in a follow-up post yesterday. "The phrase 'will not feature an obvious new form factor' leaves a lot of wiggle room with the word 'obvious'," he added.

Few other details are known about the next Apple Watch at this point, and no components have leaked from the supply chain yet.

Psst, hey everyone come over here, OK, when this guy falls asleep ... let's NOT wake him up. I mean, even when the Apple Watch Series 8 lasts for a month. Seriously, everybody with me? Good.

Soooo, does anyone have a Sharpie?
Score: 13 Votes (Like | Disagree)

Why? My Series 2 easily lasts me the full 18 hours, even then, I recharge when I need to. I don't need five straight days of battery life when Most charge their Watch daily as it is with the inductive Charger.
Score: 9 Votes (Like | Disagree)

I doubt this will happen any time soon, or perhaps ever. Every time a product is made, features are going to be balanced. For example, right now you can buy a smartwatch with more than 5 days of battery life, but it has an e-ink display. Apple chose a richer, more responsive display over better battery life.

There are others, too. If Apple wanted to build a bigger watch, it could also increase battery life. Apple could also make the display not turn on with a wrist raise to increase battery. They could remove GPS from the Series 2, and never add cell service to the watch. Apple is not making these choices because they value the features over the battery life. By not buying competing smartwatches, people are also making that choice.

I expect for the foreseeable future, battery life isn't going to stretch much beyond a full day because there are so many cool features to add. For example, it would be awesome to stream music without a phone during a workout. I'd love to make and receive calls without my phone (via Airpods). Same with getting email and texts without a phone. I'd like apps to run faster and independently of the phone. I'd like to be able to use Siri to control my smarthome stuff without a phone. The Apple Watch has a big emphasis on fitness, too. There are a lot of sensors that could be added the watch, and the sensors could be used for longer periods. The watch itself could also be smaller in thickness, have a brighter display, and louder speaker.

I expect that Apple values all of these features more than 5 day battery life.
Score: 7 Votes (Like | Disagree)

mark34
I also have a version 0 SS... still happy with it. GPS and greater water resistance was nice, but not enough to upgrade. To me, LTE is the holy grail. Not to make calls, though handy in a pinch. If in some circumstances I could just leave my phone at home and head out with my watch and know that I can remain connected for texts and emails.. that would be perfect. Disconnect without completely isolating myself. No big phone, no social media, no phone calls, but able to get important messages...Perfect.
Score: 7 Votes (Like | Disagree)

Nunyabinez
Still rocking the Series 0 and waiting for something that makes it compelling for me to change. I don't swim much, or need my watch in the shower and I tend to run on a treadmill, so nothing has done it for me yet.

I would like to have a reason for a new one, but not expecting it to happen.
Score: 6 Votes (Like | Disagree)