Apple is weighing up the possibility of developing a wearable battery module to charge an Apple Watch while it's being worn, according to a patent published on Thursday (via AppleInsider).

Details of the invention were released by the U.S. Patent and Trademark Office, under the title "Charging apparatus for wearable electronic device". The module uses an inductive element to transmit power to the smartwatch, similar to the one used in the existing Apple Watch magnetic charging cable. 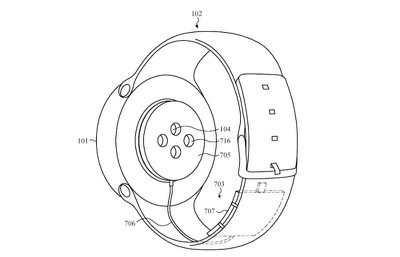 Two embodiments are described in the patent. The first shows the charger embedded in the wristband – an idea similar to previous inventions – while the second depicts a separate module that sits underneath the watch chassis and attaches to an existing band.

The induction component in the portable module is capable of both transmitting and receiving power, and aligns itself with the smartwatch or an external charging source using magnets. Apple proposes the use of heat-dissipating circuitry to ensure the module is comfortable to wear against the skin, while various wired solutions are also described for charging the device itself when not in use.

It's impossible to say whether the patent will see use in a future product, but Apple is clearly investigating various battery life solutions that don't sacrifice the thinness of the Series 2 design, which is already slightly thicker than the first generation. Improving the battery life of the next Apple Watch is also reportedly the "main task" of Quanta, the Taiwan-based company responsible for manufacturing the wearable.

Extending the time between charges would allow users to wear their watch to sleep over consecutive days, which would give Apple the opportunity to introduce sleep tracking features into the next WatchOS, as well as potentially introduce resting heart-rate tracking - a primary indicator of overall health. Extended battery life could even potentially usher in a future Apple Watch with an always-on display.

iZac
I know that these patent diagrams never reflect the actual design of a product but I'd be remiss if I didn't mention:

lolkthxbai
That's not a patent for a product. That's a patent for the chargers they use on their demo watches.
Score: 3 Votes (Like | Disagree)

This is all a little bit stupid. I just want a watch that can work long enough for a week's use. Not bits and pieces that add half a day longer. A watch that works at least a week, that's all I want.

you probably will never get one that lasts a week. but perhaps if they added some kind of kinetic charging you could go more than one day.
Score: 1 Votes (Like | Disagree)
Read All Comments