Similar to devices like Eero and Google Wi-Fi, Luma is a Wi-Fi mesh system that launched in 2015, providing users with whole home Wi-Fi, parental controls, and network security scanning. Today, the company announced a new optional subscription model is coming to its mesh router, called "Luma Guardian," and it introduces a privacy VPN, antivirus software, ISP speed monitoring, and priority tech support for $5 per month.

According to Luma CEO Paul Judge, who spoke with TechCrunch, the reason behind the subscription service is related to all of the security issues that Luma discovered within its customers' networks over the years. Luma Guardian is a way for the company to dedicate time and resources to addressing those issues for the "thousands and thousands" of homes with its mesh Wi-Fi system. 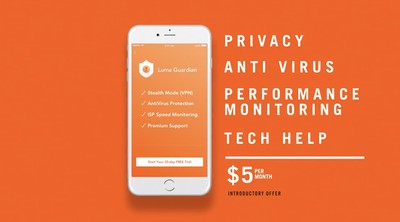 It was also one of the earlier home networking devices to bake IoT security into its system, and as a result, the company spotted security problems in around two-thirds of the “thousands and thousands” of homes that currently sport a Luma.

“We’d been blocking them, and the next step was, how do we go to their devices and clean them up?” Judge tells TechCrunch. “How do we install antivirus and clean up the infections on those devices? For 15 years, we built networking and security equipment for companies. You can have the best equipment in the world, but at the end of the day, they had a team to manage it all. Having someone there who pays attention is key.”

Luma's system already comes with a few security measures, including anti-malware, IoT cyber security, and new device alerts that block potentially untrustworthy devices from connecting to your personal Wi-Fi, and Luma Guardian expands upon those features. This includes a "Stealth Mode" that's enabled through a virtual private network (VPN), allowing users to browse the web privately thanks to encrypted and anonymized web traffic sent between the Luma system, the cloud, and third-party websites.


Antivirus protection is allowed for up to three devices in the new subscription model, through a partnership with Webroot and its SecureAnywhere software, which performs regular scans of the devices to block viruses, malware, ransomware, and any suspicious files. Users will also be able to monitor the speed being granted to them by their internet service provider, with monthly reports in the iOS app to make sure they're getting the speeds they pay for.

Also within the app, users can directly chat with Luma's support staff for any tech-related questions they have about the router or its software. Luma Guardian subscribers also receive a priority support phone number so they can be moved to the front of the line when it comes to getting help from the company's United States-based tech experts on the phone.

Luma owners can sign up for Luma Guardian through the Luma iOS app [Direct Link], and there's a 30 day free trial offer for new subscribers. The Luma router itself is sold on the company's website in a one pack ($149), a two pack ($249), and a three pack ($349). Luma describes the subscription service price as an "introductory" offer of $5/month for the first year, but the company didn't detail how much it might increase by after that period.

Would get the Google WiFi instead. No subscription fee and Google is finding many of the security issues and is going to be far more secure.

I purchased a Google WiFi three pack and been very happy with them. Highly recommend.

How is this there no disclosure on this very obvious ad? I know it's just Macrumors, but it's still an FCC violation.

This is not a sponsored post or an advertisement in any way. We've been covering updates to whole-home Wi-Fi systems over the past few months and find it worth sharing when updates come out from these companies.
Score: 5 Votes (Like | Disagree)

H3LL5P4WN
This seems like it might be the kind of thing that would save me from driving 4 hours out and back to my parents' place, as well as giving them wifi throughout their house.

kajoob
How is this there no disclosure on this very obvious ad? I know it's just Macrumors, but it's still an FCC violation.
Score: 3 Votes (Like | Disagree)

winston1236
A VPN that runs through their network? So basically you pay $5 a month to let them monitor all of your web traffic.
Score: 2 Votes (Like | Disagree)
Read All Comments