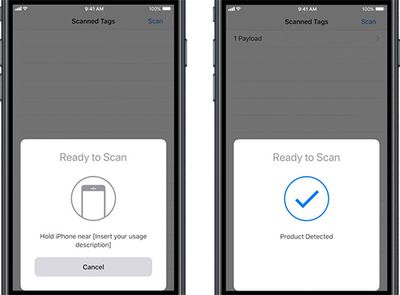 Similar to Apple Pay, iPhone users are prompted with a "Ready to Scan" dialog box. After holding the iPhone near an item with an NFC tag, a checkmark displays on screen if a product is detected. An app with Core NFC could then provide users with information about that product contained within the tag.

A customer shopping at a grocery store could hold an iPhone near a box of crackers, for example, and receive detailed information about their nutritional values, price history, recipe ideas, and so forth. Or, at a museum, a visitor could hold an iPhone near an exhibit to receive detailed information about it.

A bottle of wine with an NFC tag similar to CapSeal
Cybersecurity company WISeKey, for example, today announced that its CapSeal smart tag will now support iPhone thanks to Core NFC. CapSeal smart tags are primarily used for authentication, tracking, and anti-counterfeiting on products like wine bottles. Many other companies offer similar solutions.

When placed on a bottle of spirit or a bottle of lubricant oil, for instance, and tapped by an NFC phone, the chip is able to securely authenticate and track the bottle like an ePassport does. It offers the same certified security level. It also allows the brand to broadcast personalized messages to the phone-holder detecting whether the bottle has been open or not.

Core NFC is currently supported by the iPhone 7 and iPhone 7 Plus, and the framework is read-only for NFC tags of types 1 through 5 that contain data in the NFC Data Exchange Format (NDEF).

TheRealTVGuy
It's not enough to READ NFC, I want my Apple Watch's NFC chip to be able to lock/unlock doors and eventually unlock and start my vehicle. Basically my goal is to have an Apple watch with full Cellular and NFC capability, Air Pods, an Apple Watch app for my driver's license and nothing else. No keys, no wallet, no phone, JUST the watch and Air Pods.

Welcome to the future. No more bulky pockets full of crap.
Score: 30 Votes (Like | Disagree)

Does that mean that banks could use the NFC to pay for stuff contactlessly, just like Android?

They already have that... it's called ApplePay.
Score: 15 Votes (Like | Disagree)

dionysos283
Is there a comprehensible reason why Core NFC is only supported by the iPhone 7 and iPhone 7 Plus? :/
Score: 7 Votes (Like | Disagree)

may as well use a pay phone in the woods
Score: 7 Votes (Like | Disagree)

840quadra
Really interested to see how far this goes. I use my phone quite often to pull photos from my camera while doing shoots. Using NFC to assist in pairing for such actions is one of the few features I miss from my Android devices.
Score: 7 Votes (Like | Disagree)

H3LL5P4WN
I really want to hear about how Apple is securing this. NFC is convenient and all, but one of the reasons I like it on iPhone vs Android is that it literally only works when Apple says it should.
Score: 7 Votes (Like | Disagree)
Read All Comments