The Computer History Museum in Mountain View, California has announced that former iOS chief Scott Forstall will sit down with journalist John Markoff on June 20 for a fireside chat about how the iPhone came to be. 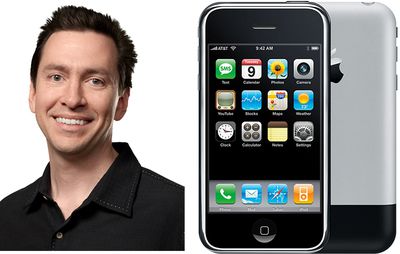 Forstall was Apple's Vice President of iOS from 2007 until 2012
Forstall will be talking publicly about Apple for the first time since he was reportedly ousted from the company in October 2012, following the botched launch of Apple Maps. Forstall has maintained a quiet presence since then, although he did announce he was co-producing the Broadway musical Fun Home in 2015.

How did the iPhone come to be? The leader of the iPhone software team Scott Forstall sits down with Computer History Museum historian John Markoff to share his experience working with Steve Jobs on the secretive Apple iPhone project, codenamed "Project Purple."

Forstall's fireside chat will be preceded by a panel discussion with a trio of engineers from the original iPhone development team, Nitin Ganatra, Scott Herz, and Hugo Fiennes, who will talk about their work on the transformative device.

The two-part event is part of the Computer History Museum's ongoing "iPhone 360" project this year that explores the story of the iPhone, from its prehistory, inception, and launch, to its evolution and impact.

Coinciding with the 10th anniversary year of the iPhone launch in 2007, iPhone 360 includes integrated initiatives across the Computer History Museum to create new collections of artifacts and oral histories, scholarly research and insights, dynamic events, and educational content and curriculum.

"Putting Your Finger On It: Creating the iPhone" is scheduled for Tuesday between 7 p.m. and 9 p.m. Pacific Time at the museum's Exponential Center. Check-in begins at 6 p.m. Registration is available online.

June 20 also marks the release of the book The One Device: The Secret History of the iPhone by Brian Merchant, in which Forstall is quoted. Apple marketing chief Phil Schiller and former iPod chief Tony Fadell have both turned to Twitter in recent days to refute some of the book's contents.

sza
He should replace Tim as CEO.
Score: 54 Votes (Like | Disagree)

Scott you should have just dropped your ego and said sorry about Apple Maps. Sucks you were so difficult to work with and got fired.
We've missed you and your ego is why we haven't heard any news from you for years. You've become that guy that has already done his best work. Thank you for it but man, you could have done so much more. I hate egos sometimes.

I respect Forstall for not giving in and apologizing for something which wasn't his fault (data). He could have taken the "easy" route and apologized just to kept his job. IMHO Cook was behaving like a goon and a bully. Steve Jobs would have never apologized or pandered to 'haters'. Kudos Forstall, we miss your work.
Score: 45 Votes (Like | Disagree)

I respect Forstall for not giving in and apologizing for something which wasn't his fault (data). Cook was IMHO a goon and a bully, trying to appease the 'gate-masses', something Steve Jobs would have never done. Kudos Forstall, we miss your work.

I agree...no matter what you say about him, iOS was stable & solid prior to iOS 7. It definitely had bugs here and there but nothing like iOS 7 - 9.
Score: 39 Votes (Like | Disagree)

zahuh
Scott you should have just dropped your ego and said sorry about Apple Maps. Sucks you were so difficult to work with and got fired.
We've missed you and your ego is why we haven't heard any news from you for years. You've become that guy that has already done his best work. Thank you for it but man, you could have done so much more. I hate egos sometimes.
Score: 20 Votes (Like | Disagree)

About the second point: In Europe the Celsius temperature and hour values are often in the same range. And they can step up in sync in the morning. You had no idea what was what; just RIDICULOUS. In CA with Fahrenheit scale you don't have this issue. I've wondered if that's why Ive wandered.
Score: 20 Votes (Like | Disagree)