A series of photos claiming to show molds of Apple's upcoming 2017 iPhone range appeared online today and over the weekend, providing a potential look at the relative sizes of the rumored new devices. Apple is expected to announce three new iPhone models this year: two LCD-based "S" cycle upgrades to the iPhone 7 and 7 Plus, alongside a radically redesigned tenth-anniversary "iPhone 8" with an edge-to-edge OLED display.

It's worth bearing in mind that the molds shown in the images could simply be made for use in the production of third-party iPhone cases rather than actual handsets. Either way, they do appear to line up with unconfirmed details we've been hearing over recent months, particularly with regard to the dimensions of the devices. 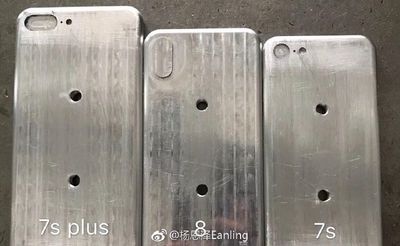 The mold of the so-called "iPhone 8" is pictured between the two iterative models, which shows the redesigned handset isn't much bigger than the 4.7-inch iPhone 7S chassis on the right hand side. Despite the similarity, reports suggest the redesigned phone could pack a 5.8-inch display that's closer in size to the screen on the 5.5-inch iPhone 7 Plus. A lack of bezels at the top and bottom of the device are said to enable the larger OLED area.

The side-on view offers another take on the relative dimensions, and also reveals a longer power button on the OLED iPhone in the middle. The appearance of the longer button in previous dummy images has led to speculation that it could act as a fingerprint recognition surface if Apple can't integrate Touch ID into the OLED display. Rumors say Apple has struggled to overcome the challenges involved in such a feat, but details are still sketchy.

Some sources suggest the company could resort to placing the sensor on the back of the handset, like on the Samsung Galaxy S8, but most agree this would be an inferior implementation compared to Touch ID's current front-facing location on the home button.

Cutouts for the rear camera in the middle mold line up with previous rumors that Apple will go with a vertical dual-lens orientation in the "iPhone 8", in contrast to the horizontal layout on the iPhone 7 Plus, which is expected to remain on the 7S Plus.

The OLED iPhone is expected to be unveiled at a September event alongside the "S" cycle phones, and could feature new 3D-sensing technology in the front-facing camera, as well as a faster A11 chip, face and iris recognition, better waterproofing, some form of wireless charging, and a glass body.

Lostanddamned
The 8 will need to be all screen in order to justify that size over the iPhone 7S+, I’ve grown very very used to the large screen.
Score: 12 Votes (Like | Disagree)

Matthew.H
Touch ID in the power button would certainly be better than on the back.
Score: 12 Votes (Like | Disagree)

superheroux
I would really love to see a near borderless iPhone SE sized phone. I am sitting on a 5s right now waiting either for it to die or for Apple to come out with something that is a real upgrade.
Score: 11 Votes (Like | Disagree)

Hmmm. Can't see myself going smaller after a 6s+ even though the potential of what the 8 will bring is attractive. Tough call. I got a big iphone for a reason.

The new design is still going to have a bigger screen than the current Plus. Why do you just want a bigger physical device?
Score: 10 Votes (Like | Disagree)
Read All Comments