Linksys today introduced its first 2-in-1 wireless router and cable modem. The emphasis should be on "cable" in that sentence, as Linksys already sells a handful of routers with built-in DSL modems for internet over a telephone line. 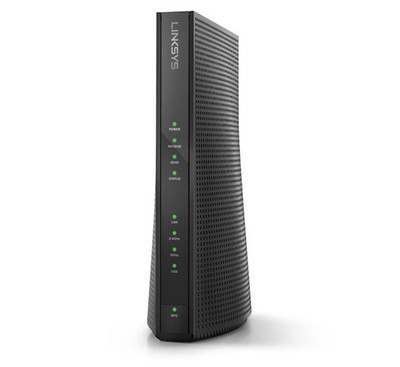 The modem is DOCSIS 3.0 certified, meaning it is compatible with Comcast Xfinity and Charter Spectrum in the United States, and many other major cable providers, for internet plans with theoretical speeds of up to 300 Mbps. Linksys says it can be used with 12+ devices at once without any lag or buffering.

2-in-1 modems and routers are often considered worse than a separate router and modem combination, but the CG7500 is worth considering for anyone that wants to stop renting a modem from their cable company. For most people, it'll likely provide good enough Wi-Fi in a medium-sized house or apartment.

Linksys is accepting pre-orders for the CG7500 on its website for $199.97 in the United States. It'll be available from Amazon, Best Buy, B&H, Micro Center, New Egg, Office Depot, Target, Walmart, Fry's, and Meijer on May 15.

You're super cool bro. I bet everyone wants to be your friend.

This router can support well over 100 devices. They point out it can support 12+ devices simultaneously without lag or buffering. That's thanks to the 3x3 AC and isn't something every wireless router can do.
[doublepost=1494522725][/doublepost]

You know, they won't cost them (ISP) the price you normally pay, if you pay $100 for a Modem they very likely have them for half of that (Or less) just because they buy them by the millions.

What you've written A) doesn't make sense, B) nor does it matter here.

OldSchoolMacGuy
Use to work for both Time Warner and Comcast. I'd highly suggest NOT going with a 2 in 1 combo.

Cable modems are sensitive hardware. There are often minor power fluctuations within the cable system and these can cause your modem to be damaged (resulting in fun stuff like flapping, microrefractions, and more), which can lead to service issues.

At least with a standalone router, you don't have to replace 2 pieces of expensive hardware should there be any flux on your line.
Score: 4 Votes (Like | Disagree)

yg17
So this is just a paid advertisement, right? Because I fail to see how it is in any way relevant to Apple.
Score: 4 Votes (Like | Disagree)

I bought a cablemodem from Amazon 3 years ago and it paid for itself in 10 months.
Money well spent.
Score: 3 Votes (Like | Disagree)

emm386
I don't mean to question Linksys's expertise in decent networking hardware, but DOCSIS 3.0 -compliance is... ancient by today's standards. And so is USB 2.0...
Score: 3 Votes (Like | Disagree)

Use to work for both Time Warner and Comcast. I'd highly suggest NOT going with a 2 in 1 combo.

Cable modems are sensitive hardware. There are often minor power fluctuations within the cable system and these can cause your modem to be damaged (resulting in fun stuff like flapping, microrefractions, and more), which can lead to service issues.

At least with a standalone router, you don't have to replace 2 pieces of expensive hardware should there be any flux on your line.

I would suggest the same thing. Just sold a friend a spare modem I no longer need plus a spare router in order to help him stop renting and save the money.

I think buying a modem versus renting pays for itself much fast than you may think.

I paid just over $80 shipped for the highest rated docsis 3.0 Motorola cable modem on amazon and was able to cancel renting for Comcast's $10 charge monthly. So 8-9 months I am getting money back in my pocket.
[doublepost=1494695557][/doublepost]

Living in the UK, it's bizarre that this is news. Pretty much all ISPs over here (we have one national Cable ISP and many DSL-based ISPs) bundle a combined modem and wireless router and have done for probably ten years. There is no separate fee to rent your router, it's just expected as part of your monthly broadband fee.

The combo modem/router is not news. It's more that linksys just introduced their first cable modem combo (whereas they already have had dsl combos for a very long time.).
Score: 3 Votes (Like | Disagree)
Read All Comments

Thursday January 14, 2021 9:32 pm PST by Juli Clover
Apple is working on two new MacBook Pro models that will feature significant design changes, well-respected Apple analyst Ming-Chi Kuo said today in a note to investors that was obtained by MacRumors. According to Kuo, Apple is developing two models in 14 and 16-inch size options. The new MacBook Pro machines will feature a flat-edged design, which Kuo describes as "similar to the iPhone 12" ...
Read Full Article • 489 comments

Thursday January 14, 2021 8:07 am PST by Joe Rossignol and Steve Moser
In the second beta of iOS 14.4 seeded to developers and public testers this week, MacRumors contributor Steve Moser has discovered code indicating that Apple will be introducing a new warning on iPhones that have had their camera repaired or replaced with aftermarket components rather than genuine Apple components. "Unable to verify this iPhone has a genuine Apple camera," the message will...
Read Full Article • 73 comments

Thursday January 14, 2021 11:36 pm PST by Eric Slivka
Following today's report from analyst Ming-Chi Kuo outlining major changes for the next-generation MacBook Pro models coming in the third quarter of this year, Bloomberg's Mark Gurman has weighed in with his own report corroborating some of the details but seemingly differing a bit on others. First, Gurman shares more details on the return of MagSafe charging to the MacBook Pro, indicating...
Read Full Article • 234 comments