Another alleged iPhone 8 schematic is making the rounds today, shared on Twitter by several "leakers" who often share alleged leaked device images sourced from Weibo and unnamed tipsters. KK Leaks, OnLeaks, and Benjamin Geskin have all tweeted the image, which comes from an unknown source.

It is not clear if the schematic is legitimate, and we're at the point in the rumor cycle where it's difficult to separate what's real from what's fake, so it's best to view all current leaks with some skepticism. 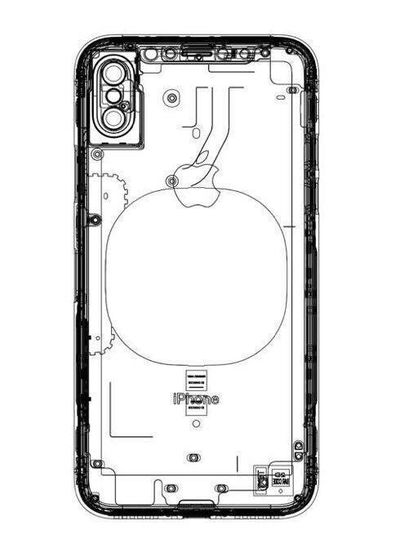 This is a tipped leak what means I can't confirm if legit or not but there you have it... #iPhone8 pic.twitter.com/6OgASNUDNb — OnLeaks (@OnLeaks) April 26, 2017

The schematic appears to depict the interior of the OLED iPhone 8, and it matches many previously-leaked design schematics and rumors. The device pictured features a vertical dual-lens rear camera with an LED flash in the middle, and it includes a large circular area, perhaps for some kind of wireless charging functionality. No rear Touch ID button is included in the schematic.

Over the course of the last few weeks, we've seen several alleged design schematics and renderings that are said to represent the iPhone 8, but because Apple is said to be testing multiple prototypes, we appear to be seeing two distinct devices, and it's not clear which one represents Apple's final 2017 iPhone.

One device, which seems to be similar to the device in the schematic above, features an edge-to-edge display with a small 4mm bezel, what appears to be a glass body (perhaps with a stainless steel frame), and a Touch ID Home button that appears to be embedded in the display, while the other features an edge-to-edge display with slightly wider top and bottom bezels, an aluminum body, and a Touch ID Home button located on the rear of the device.

While we're seeing different designs at the current time, there are several rumors that are consistent. The OLED iPhone is said to be similar in size to the 4.7-inch iPhone but with a display closer in size to that of the 5.5-inch iPhone, and almost all current rumors point towards a vertical dual-lens camera for improved images and perhaps some kind of augmented reality or 3D functionality.

Not much has been said about wireless charging recently, but Apple is supposedly implementing some kind of inductive charging solution, and we can count on an improved A11 processor in the device.

Apple plans to sell the OLED iPhone alongside two standard iPhones with LCD displays, which are said to be similar in size to the existing iPhone 7 and iPhone 7 Plus. With many of the rumors focusing on the flagship OLED iPhone, not much is known about the other two iPhones and their specific design also remains unclear.

Recent rumors are suggesting the OLED iPhone may be severely constrained when it launches in September, so it could be difficult to get for several months. That's a common rumor that we hear every year ahead of the debut of a new iPhone, but the rumors, coming from trusted sources, are especially emphatic and dire this year, suggesting there's some truth there.

AngerDanger
You heard it here first: the iPhone 8 will feature a giant super-elliptical screen on the back for you to place the app icon of your choice!

CarlJ
But I wanted a wireless camera and dual-lens charging!
Score: 26 Votes (Like | Disagree)

Mascots
We'll get 2-3 of these a week until September so hold on to your butts, everyone.
Score: 18 Votes (Like | Disagree)

mi7chy
Big pad in the center is for face sensor. It works by pressing your face against it to authenticate. Could be expanded to authenticate other body parts.
Score: 13 Votes (Like | Disagree)

Zaft
If apple can get the FP reader on the screen that will be huge.
Score: 12 Votes (Like | Disagree)
Read All Comments