Tuesday April 18, 2017 11:08 am PDT by Juli Clover
In honor of Earth Day, which takes place on Saturday, April 22, Apple employees will transition from their standard blue shirts to green Earth Day shirts starting on Thursday, April 20.

Apple also celebrates Earth Day by updating the logos on its retail stores around the world, adding a green leaf accent to the traditional white Apple. Earth Day represents one of the few days a year Apple alters its logo. 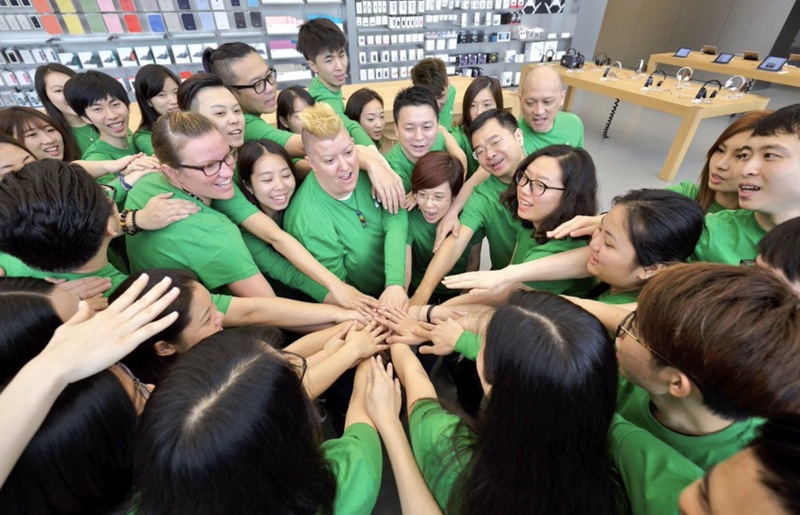 Apple often uses Earth Day as a way to highlight its environmental efforts and reaffirm its commitment to recycling, renewable energy, and other initiatives. According to a recent interview with Apple's VP of Environment, Policy, and Social Initiatives Lisa Jackson, 96 percent of the energy Apple uses around the world now comes from renewable sources like wind and solar.

Last year, Apple released a host of earth-inspired Apple Music playlists, launched a "Siri and Liam" ad outlining its recycling practices, and launched an "Apps for Earth" promotion, with proceeds donated to the World Wildlife Fund. Similar promotions could take place this year, with announcements coming this week ahead of April 22.

Voidness
I wonder what the carbon footprint is for procuring and distributing green t-shirts for Apple Store employees around the world? Doesn't sound so green to me.
Rating: 22 Votes

now i see it
The real Earth Day: malexandria
Because creating all those T-shirts are good for the environment. If Apple really wants to be "true" it should have all their employees go topless.
Rating: 8 Votes

illnagas
lately it seems like Apple has more 'activism' headlines than actual technology headlines. I'm all for earth day and environmentalism but its been years since I was looking forward to an Apple product.
Rating: 5 Votes

mdridwan47
Gotta virtue signal to your hippie base.
Rating: 4 Votes

If Apple really wants to be "true" it should have all their employees go topless.


Not even a genius bra?
Rating: 3 Votes

At least these look nicer than the Ugly Shirts they received as Christmas Presents in 2016.