Apple has informed its authorized resellers that the Mac Pro's new 8-core stock configuration will be available to order by the end of April. Until then, Apple said the model can be created by selecting the 6-core option and using the configure-to-order options to match the 8-core model's upgraded tech specs. 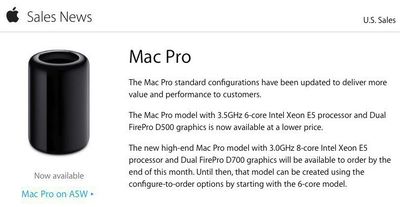 Packaging changes are likely the only reason why the 8-core model is currently unavailable as a stock configuration to resellers and customers, given that the base model customized with an 8-core processor and dual AMD FirePro D700 GPUs for the same price currently ships in 1-3 business days on Apple.com.

Apple listed the new Mac Pro configurations on its online store on Tuesday, but the 8-core model is currently unavailable for customers to order. Apple's website briefly said the 8-core model would be available in "30 business days," somewhat in line with the end of April, but that estimate was quickly removed.

Apple has discontinued the previous base model, equipped with a quad-core Xeon E5 processor, dual AMD FirePro D300 GPUs, and 12GB of RAM.

The bigger news is that Apple said it is working on a "completely rethought" Mac Pro featuring a modular design. The all-new Mac Pro, which won't launch until at least next year, will be Apple's highest-end, highest-throughput system, and it will be accompanied by a new Apple-branded pro-focused external display.

Apple also said that it is working on new iMac models that will be unveiled later this year, but it remained tight-lipped about what to expect. It is rare for Apple to pre-announce future products in this manner, but it was a welcomed response to concerns that Apple was no longer focused on professional users.

Given that the current Mac Pro still has over three year old hardware, prospective buyers should weigh the price drop against the old tech before purchasing the computer. Some professionals might consider waiting for the completely redesigned and modular Mac Pro launching at some point after 2017.

2807
This really needs a corresponding watchband.
Keep up the good work Apple.
Score: 19 Votes (Like | Disagree)

Coyote2006
At least Apple could have updated the GPUs and dropped the overall price. 3 years old GPUs incredible ... but hey, we get a red iPhone!
Score: 14 Votes (Like | Disagree)

That is the real question.

This smells of Apple trying hard to shift the massive amounts of unsold Mac Pro's they have after totally mis-reading the market and not giving Pro's fully customisable replacement for the Towers.

They either have a warehouse full of these that they invested Huge amounts of R&D to recover by selling cheaper now...or they are genuinely worried that most Pro users have gone to the iMac and are trying to keep faith with them now.

They will struggle to sell these...
Score: 11 Votes (Like | Disagree)

It's curious why people would want these after 3.5 un-updated years and rather lackluster benchmarks and internals (by today's standards). It would be better to buy a top-end iMac, and it would be cheaper.
Score: 9 Votes (Like | Disagree)

The thermals are so bad they can't create a trash can with 2017 spec CPU / GPU? Can't make the heat sink out of copper in a $5K computer? Can't up the fan speed and admit it is louder? Is there no one left at Apple who can read data sheets and run autoroute?

What gets me about the trash can Mac Pro is how they repeated the same mistake made 13 years earlier with the G4 Cube, only this time in such a way that it is much harder to correct. The Cube didn't have the expandability professionals wanted, and on top of that the newer/better G4 internals ran too hot inside the enclosure for it to be practical, resulting in the Cube being discontinued only a year after it was released.
Score: 7 Votes (Like | Disagree)
Read All Comments