Apple today reshuffled its Mac Pro configurations and pricing, marking the first "update" to Apple's pro-oriented desktop computer in over three years. Apple also confirmed it is working on a "completely rethought" Mac Pro with Apple-branded pro displays that will launch at some point beyond this year. 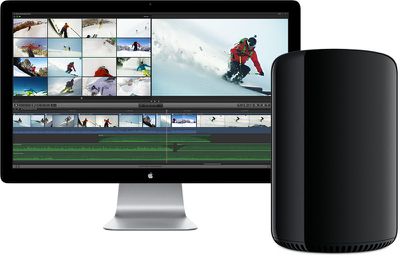 The former $3,999 model is now the $2,999 base model, while the previously built-to-order 8-core model with dual D700 GPUs is now the high-end stock configuration for $3,999. Both models are equipped with 256GB PCIe-based flash storage, four USB 3.0 ports, six Thunderbolt 2 ports, and dual Gigabit Ethernet ports.

Meanwhile, Apple said an all-new Mac Pro will be a high-end, high-throughput modular system that will "take longer than this year" to complete. It will be accompanied by an Apple-branded external display in at least one size, essentially marking the return of the discontinued Thunderbolt Display.

With regards to the Mac Pro, we are in the process of what we call "completely rethinking the Mac Pro." We’re working on it. We have a team working hard on it right now, and we want to architect it so that we can keep it fresh with regular improvements, and we’re committed to making it our highest-end, high-throughput desktop system, designed for our demanding pro customers.

As part of doing a new Mac Pro — it is, by definition, a modular system — we will be doing a pro display as well. Now you won’t see any of those products this year; we’re in the process of that. We think it’s really important to create something great for our pro customers who want a Mac Pro modular system, and that’ll take longer than this year to do.

The CPUs, we’re moving them down the line. The GPUs, down the line, to get more performance per dollar for customers who DO need to continue to buy them on the interim until we get to a newly architected system.

Apple said that Mac desktops represent roughly 20 percent of overall Mac sales, with the Mac Pro accounting for only a "single-digit" percentage of Mac sales, perhaps as justification for the elongated refresh cycle. 1,202 days had passed since the last Mac Pro update, per the MacRumors Buyer's Guide.

Apple also suggested that the "trash can" design of the current Mac Pro has restricted its ability to truly upgrade it.

Being able to put larger single GPUs required a different system architecture and more thermal capacity than that system was designed to accommodate. And so it became fairly difficult to adjust. At the same time, so many of our customers were moving to iMac that we saw a path to address many, many more of those that were finding themselves limited by Mac Pro through a next generation iMac.. And really put a lot of our energy behind that. [But,] while that [upgraded iMac] system is going to be fantastic for a huge number of customers — we want to do more.

It isn't often that Apple pre-announces new products in its pipeline, but there were growing concerns that Apple no longer cared about professional users, and this is the company's way of proving otherwise. Schiller reiterated that Apple is committed to the Mac and has "great products" planned for the future.

We’re committed to the Mac, we’ve got great talent on the Mac, both hardware and software, we’ve got great products planned for the future, and as far as our horizon line can see, the Mac is a core component of the things Apple delivers, including to our pro customers.

Apple's repriced Mac Pro configurations are now listed on its online store, but the 8-core model is "currently unavailable."

Chicane-UK
They finally did something, and gave Pro customers news on a roadmap. About. freaking. time.
Score: 80 Votes (Like | Disagree)

Oblivious.Robot
This should make a lot of people at Macrumors happy, right?

With regards to the Mac Pro, we are in the process of what we call “completely rethinking the Mac Pro”. We’re working on it. We have a team working hard on it right now, and we want to architect it so that we can keep it fresh with regular improvements, and we’re committed to making it our highest-end, high-throughput desktop system, designed for our demanding pro customers.

As part of doing a new Mac Pro — it is, by definition, a modular system — we will be doing a pro display as well. Now you won’t see any of those products this year; we’re in the process of that. We think it’s really important to create something great for our pro customers who want a Mac Pro modular system, and that’ll take longer than this year to do.

The Mac is not dead.

sfwalter
Now Apple this is courage. You like to be very secretive. This must have been hard to swallow. Telling your users (and competitors) about future plans.
Score: 52 Votes (Like | Disagree)

Appleaker
Wow.... This is unexpected. Is it a delayed April fools post?

Although I have said many times that there is a truly new Mac Pro, new iMacs, and Apple displays in the works. I guess this is confirmation to doubters.
Score: 41 Votes (Like | Disagree)
Read All Comments