Apple today announced that it will be opening its second retail location in Dubai, the most populous city in the United Arab Emirates.

The store will be located at The Dubai Mall in downtown Dubai, opposite the Burj Khalifa, the tallest structure in the world. As we reported in February, the store will be split into two floors inside the shopping mall. Apple said the grand opening will be "soon," but it did not provide a specific date or time.

Apple is celebrating the upcoming grand opening with an artistic display on its website and on the construction barrier covering the storefront.

Meanwhile, in the United States, Apple continues to renovate a number of its older stores with its newer retail design introduced in 2015.

Apple also announced that its current North Point Mall store in Alpharetta, Georgia will be closing and relocating to Avalon, a new mixed-use development in the Atlanta suburb. The grand opening is April 13 at 10:00 a.m. local time. 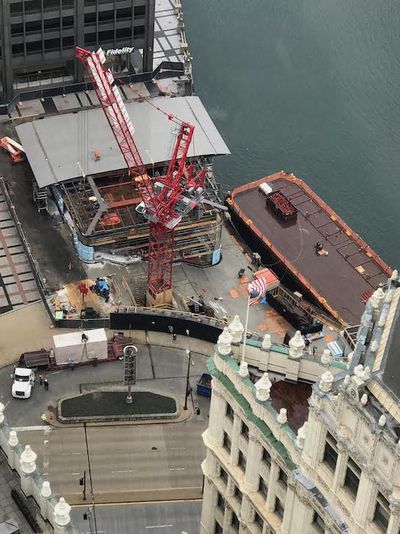 Roof panels for the Chicago River store arrived on a barge (Thanks, Steve!)
The store will include a "grand flight of stairs" going from street level to a walkway alongside the Chicago River's north bank. At street level, the store will have an entry pavilion that's 14-feet high. Pedestrians entering from North Michigan Avenue can reach the sales floor by stairs or elevator.

MacRumors has also received a tip from reader David about Apple possibly expanding its retail store at the Providence Place shopping mall in Providence, Rhode Island. David sent us a photo of what appears to be Apple's typical black construction barrier taking up four units on the lower level of the Macy's wing of the mall.

The tipster said he confirmed with multiple employees that the construction is indeed for a new Apple Store in the mall, which will replace its much smaller one down the hall. The tipster has heard that Apple is aiming to complete construction by June, and the store will likely open at some point in the summer.

Update: Apple is also putting the finishes touches on its first store in Singapore, expected to open at some point in the next few months.

jamescobalt
So a company lead by an openly gay man is opening a shop in a country where gay men are at best chemically castrated and at worst sentenced to death. Interesting.
Score: 11 Votes (Like | Disagree)

I see money > doing what is right for LGBT rights. Way to go Apple.
Score: 8 Votes (Like | Disagree)

bitfactory
In Dubai, will the women be allowed in the store w/out being accompanied by a man?
Score: 3 Votes (Like | Disagree)

Hopefully it will have a permanent rainbow flag Apple logo above the door! I guess it's a two way street, if the people are prepared to buy products from a company with an openly gay CEO does that show a 'crack in facade' that people can exploit?

Only Indiana is worth boycotting, apparently.
Score: 3 Votes (Like | Disagree)

Attirex
I wish Apple would stop worrying about sequoia wood tables and spend some of their billions on new Mac--OH WAIT.

So a company lead by an openly gay man is opening a shop in a country where gay men are at best chemically castrated and at worst sentenced to death. Interesting.

Thursday September 29, 2022 12:38 pm PDT by Juli Clover
Tony Blevins, Apple's vice president of procurement, is set to depart the company after he made a crude comment about his profession in a recent TikTok video, reports Bloomberg. Blevins was in a video by TikTok creator Daniel Mac, who was doing a series on the jobs of people he spotted with expensive cars. After seeing Blevins in an expensive Mercedes-Benz SLR McLaren, Mac asked Blevins what ...
Read Full Article • 527 comments