AAPL rose over two percent on Tuesday to close at $143.80, a new all-time high. The stock also surpassed a per-share price of $1,000 when adjusted for Apple's 7-for-1 stock split in June 2014. Apple now has a market valuation of over $750 billion on its path towards becoming the world's first trillion dollar company. 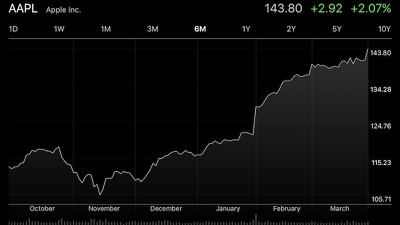 The milestone comes as longtime Apple analyst turned venture capitalist Gene Munster told CNBC that now remains a "golden opportunity" to buy Apple stock. Munster's new firm Loup Ventures has a $180 to $200 price range for AAPL, and he expects "clear sailing" for Apple investors in the months ahead.

Apple analyst Brian White of brokerage firm Drexel Hamilton maintained his "buy" rating for AAPL today, with a price target of $185. He continues to believe that Apple remains "among the most underappreciated stocks in the world" and that "Apple has Samsung on the ropes like never before in recent memory."

An excerpt from White's latest research note obtained by MacRumors:

With Apple operating on all cylinders and a strong iPhone launch expected this fall, combined with the rise of more China-based competitors, we believe the pressure is on Samsung to deliver a strong upgrade without any missteps. We believe if Samsung stumbles again, the company's position in the smartphone market could be permanently impaired.

Apple analyst Steven Milunovich of investment bank UBS has maintained his "buy" rating for AAPL as well, with a price target of $151 set in late February. In a bullish scenario where Apple has "caught the next major trend," he believes the stock's price could reach $200 within the next two years or so.

Apple is widely expected to benefit from another "supercycle" of iPhone upgrades this year, given a "larger than ever" base of existing customers with an iPhone 6 or older device. Apple's stock price has also been fueled by excitement surrounding a rumored 5.8-inch iPhone with an edge-to-edge OLED display.

Update: AAPL closed at $144.12 on Wednesday, setting yet another all-time high.

These numbers certainly fly in the face of what all the MBP owners seem to feel about Apples future. :)

The new MacBook Pro absolutely slays and most 2016 MBP owners can't be happier with it. That's because they actually bought it and loved it, rather than looked at the paper specs and scoffed.

Don't believe the negativity here; the MacWhiners are the exception to the rule. Just reading this website, you'd think that everybody hates the 2016, but that couldn't be further from the truth. :)
Score: 19 Votes (Like | Disagree)

The new MacBook Pro absolutely slays and most 2016 MBP owners can't be happier with it. That's because they actually bought it and loved it, rather than looked at the paper specs and scoffed.

Well said. MR users have dismissed every major Apple innovation since the iPod; including the iPhone, iPad and TouchBar. If you make investment decisions based on the comments here you're going to miss out.

Hell, if you make purchasing decisions based on the comments here you're going to miss out.
Score: 14 Votes (Like | Disagree)

smallcoffee
Yeah. As a 6 series owner I didn't find the 7 compelling enough to upgrade.... There's a huge glut of people who are in "upgrade mode" and if this new iPhone is even close to what it's hyped to be Apple is going to make a ton of money.
Score: 13 Votes (Like | Disagree)

cdmoore74
Why do I have a feeling that all we are going to get this fall is an iPhone 7S? It's like the more money Apple makes the less innovative they get.
Score: 11 Votes (Like | Disagree)

cardfan
Not the best time to buy.
Score: 10 Votes (Like | Disagree)

Why do I have a feeling that all we are going to get this fall is an iPhone 7S? It's like the more money Apple makes the less innovative they get.