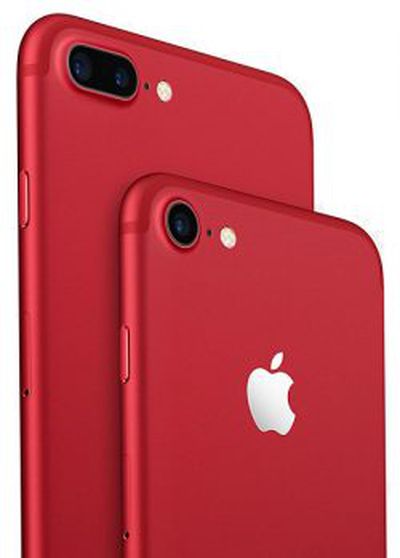 With the news earlier today that Apple has ditched the PRODUCT(RED) branding for the red iPhone 7 and 7 Plus in China, MacRumors reached out to CEO Tim Cook to find out if any of the proceeds on sales in the country would still be donated to charity in the fight against HIV/AIDS.

MacRumors' question: We noticed the (PRODUCT)RED branding is missing from the new red iPhone 7 on the China Apple website. Will you be donating any of the proceeds from the phone's China sales to the HIV/AIDs cause anyway?

Tim Cook's response: We donate to the Global Fund on every iPhone 7 and iPhone 7 Plus we sell in every country in the world.

Since the omission of the branding came to light, there's been some speculation that recent changes in Chinese law prevent not-for-profit organizations from being involved in commercial advertising. Whatever the truth of the matter, it appears Apple will be upholding its (PRODUCT)RED charitable donations commitment with or without said branding.

Apple's special edition red iPhone 7 models, due to be launched on Friday in more than 40 countries, are the first iPhones to join Apple's (PRODUCT)RED line-up. Apple said the new handset color was in recognition of more than 10 years of partnership between Apple and the charity (RED), offering customers a way to contribute to the Global Fund and "bring the world a step closer to an AIDS-free generation".

In the same press release, (RED) CEO Deborah Dugan said Apple is the world's largest corporate donor to the fund, having contributed more than $130 million to the charity, which seeks to provide "testing, counseling, treatment and prevention programs with a specific focus on eliminating transmission of the virus from moms to their babies".

Other Apple products in the (PRODUCT)RED range that are available all year round include the full iPod line of products, Beats Solo3 Wireless On-Ear Headphones, Beats Pill+ Portable Speaker, the iPhone 7 Smart Battery Case, and a range of accessories for iPhone, iPad, and Apple Watch.

Aldaris
Sounds (from his response) like every iPhone sold whether (RED) or not has a donation attached.
Score: 13 Votes (Like | Disagree)

BruiserB
Just as I suspected in the last thread on this.....

Apparently they can't promote a charity in China, but that doesn't mean they can't still donate to it.
Score: 11 Votes (Like | Disagree)

This donation initiative is just another tax exemption. Not impressed.
Score: 10 Votes (Like | Disagree)

If they are giving the donation from China sales, then why did Apple choose to not market it as "product red" in China? He could have acknowledged that part of the question.

Straight from the article:

Since the omission of the branding came to light, there's been some speculation that recent changes in Chinese law ('http://www.mps.gov.cn/n2254314/n2254409/n4904353/c5548987/content.html') prevent not-for-profit organizations from being involved in commercial advertising.

applesith
If they are giving the donation from China sales, then why did Apple choose to not market it as "product red" in China? He could have acknowledged that part of the question.
Score: 5 Votes (Like | Disagree)

Draeconis
If he could confirm any sort of plan for new hardware while he's at it, that'd be swell.
Score: 5 Votes (Like | Disagree)
Read All Comments