iOS Grew to Capture 42% of U.S. Smartphone Market Over Holidays

From November 2016 through January 2017, iOS devices accounted for 42 percent of smartphone sales in the United States, growing 2.9 percentage points year-over-year thanks to iPhone sales over the holidays. According to new data released by Kantar Worldpanel, the same period saw a decline for Android smartphones, which still captured the largest share of the market at 56.4 percent in the United States, but was down 1.8 percentage points from the same three month period last year.

A similar growth for iOS and decline for Android -- likely due to the Note7 -- was noted by Kantar in a report focusing on OS market shares ahead of the holiday season. In today's findings, Kantar noted that as iOS and Android continue to battle it out in every market, "no other ecosystem is challenging the two giants." Some re-emerging brands catalyzed nostalgic spending for consumers -- including the Nokia 3310 and BlackBerry KEYone -- but their reliance on Android's OS instead of their own legacy OS helped boost Android's market shares. 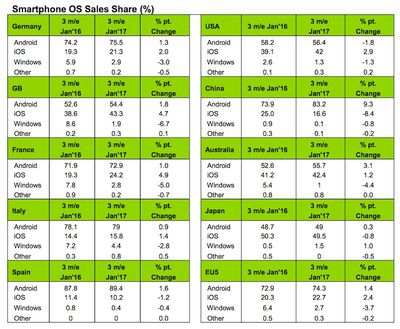 Gone are the days when a BlackBerry OS, Symbian, or Windows Mobile could make a significant impact. It is clear that there will only be two smartphone ecosystems moving forward – iOS and Android. To succeed, phone manufacturers will have to play by those rulebooks.

Kantar noted that the iPhone 7 continues to be a top seller in large markets, particularly in Great Britain, France, and Germany. In total, iOS made gains across most regions excluding Japan, Spain, and China. In China specifically, iOS saw its largest year-over-year decline of 8.4 percentage points, knocking its market share down to 16.6 percent below Android's 83.2 percent. Kantar noted that while the iPhone 7 is the top-selling smartphone in China as well, increased competition from local vendors Oppo and Vivo contribute to Apple's continued yearly declines in the country.

iOS saw its biggest growth in the three months ending January 2017 in France, increasing 4.9 percentage points year-over-year to capture 24.2 of the smartphone OS market share in the country. In all of Europe's five big markets -- Great Britain, Germany, France, Italy, and Spain -- iOS had a 22.7 percent market share, an increase of 2.4 percentage points from the same period last year. Like in the U.S., Android remains dominant in Europe at 74.3 percent of the smartphone market.

A redesigned "iPhone 8" will help boost Apple's share of the market when it launches later this year, although recent rumors suggest that the tenth anniversary iPhone might launch much later than more iterative 4.7-inch and 5.5-inch "iPhone 7s" devices in September. When it does, the all-new iPhone is predicted to include an edge-to-edge OLED display, lack a traditional Home Button, and potentially have wireless charging capabilities.

It would be interesting to study those who purchase Windows phones. Never mind. Microsoft employees.

I wouldn't say that. Microsoft's OS looked extremely promising, and from my tests from demo's, it was actually one of the nicest OS's to use. I much preffered it's styling over Android and iOS.

The problem wasn't the actual OS, or even the hardware. it was the 3 different versions Microsoft tried before finally settling on the last version. And each time software was incompatible. no old devices got upgrades (twice in a row!) and then developers walked away when they constantly had to re-write apps. at the end of the day, Windows Phone OS was great, there were just nothing to do on the device. none of your banking apps were there, none of your favourite social media had good apps. unless you were knee deep in Microsoft's ecosystem already, there was nothing to actually play or run on the Windows Phone

it's unfortunate, because I would have loved to see the Smartphone industry be a 4 player game and have some real good stiff competition. Both BB10 and Windows Phone actually brought some significant improvements to the smartphone world
Score: 18 Votes (Like | Disagree)

brendu
Just wow. So much money. Apple better be using it to create an amazing future.
Score: 7 Votes (Like | Disagree)

esk
Am I the only one who is absolutely not interested in iOS or Android devices. I wish apple would invest more time and money in their mac line
Score: 7 Votes (Like | Disagree)

Meanwhile, iOS is being trounced by Android.

Depends on what you mean by "trounced". If selling five $50 Android phones instead of one iPhone 7 means "trouncing", then Apple is getting "trounced". If you talk about putting money in the bank, Android is sooo trounced it's not funny anymore.
Score: 6 Votes (Like | Disagree)

I'm interested in iOS and Android devices but yes, I too would like them to do that.

I mostly agree. But i'm old school computer guy. For me the phone / tablet compliments my computer usage, and not the other way around

Unfortunately for us old dogs, Apple is going after the money, not after their own legacy. That means iOS since iOS is their big money maker with the iPhone and iPad making up over 80% of their revenues.

Unfortauntely, Apple's executive have shown little care, or little ability to understand the current PC market and have seemingly walked back from it, even though the PC industry was where they focused for 80% of their time in existence.

this is just life, and unfortunately, my next laptop won't be an Apple product because of their inability to understand the PC industry anymore. Which saddens me, because the MacBook air was my favourite laptop I've owned.
Score: 5 Votes (Like | Disagree)

History of the 90's is definitely not repeating.
Score: 4 Votes (Like | Disagree)
Read All Comments