Berkshire Hathaway More Than Doubled its Stake in Apple in January

In an interview with CNBC today, billionaire investor Warren Buffett revealed that his holding company Berkshire Hathaway held around 133 million shares in Apple prior to the company's record-breaking earnings results on January 31. 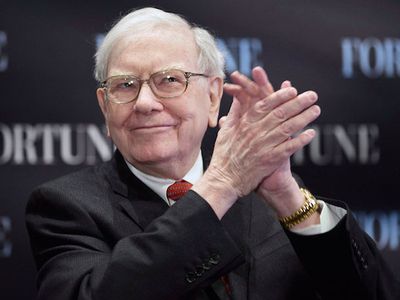 Berkshire Hathaway disclosed that it held 57.3 million shares in Apple as of December 31, 2016, so it more than doubled its stake in the iPhone maker in January. The holding, which reflects about 2.5% of Apple's outstanding shares, is worth over $17 billion if the shares are still held today.

Berkshire Hathaway disclosed a nearly $1 billion stake in Apple last May, which led the iPhone maker's stock to soar 9% once the investment became public knowledge. Apple stock has been on the rise since then, closing at an all-time high of $137.11 last week just nine months after setting a 52-week low of $89.47 in May 2016.

djcerla
The holding, which reflects about 2.5% of Apple's outstanding shares

this is absolutely bonkers: AAPL is now Buffett's second holding after Coca-Cola. Excellent news for the stock.

Buffett also praised Tim Cook, and rightly so. 2017 will be an amazing year for Apple and AAPL.
Score: 6 Votes (Like | Disagree)

I took CNBC guest's words at face value. If that's the case, then wow.

Understood. Berkshire has held 400 million shares (split-adjusted) of KO for a long time. It's currently trading at less than $42, so that's less than $17 billion worth of Coca-Cola. If Berkshire now holds 133 million shares of AAPL (which is what Mr. Buffett indicated this morning), at around $137 that's more than $18 billion worth.
[doublepost=1488208016][/doublepost]To add a little more to what Mr. Buffett said about Apple this morning...

He indicated that Berkshire wasn't currently buying AAPL, that it hadn't bought AAPL since the earnings report. He also indicated that it was at a different price now than he would buy it at.

Perhaps the funniest thing Mr. Buffett had to say came in response to Becky Quick asking which company Mr. Buffett would bet on going to a $1 Trillion market cap first - Berkshire or Apple. Mr. Buffett said Apple and then proceeded to jokingly say (I'm paraphrasing a bit)... If Tim wants to swap straight up, I've got an 800 number for him. In other words, he'd swap Berkshire Hathaway straight up for Apple if he had that option.
Score: 4 Votes (Like | Disagree)

I wish I was rich enough to make money off other people's successes.

Warren Buffett started in the same fashion as you: with nothing.
Score: 3 Votes (Like | Disagree)

Can you explain further what you mean between Buffett and luck?

Gosh, you'd only have to ask him. One of Buffett's more admirable traits is the rare personal humility that allows him to admit that luck was a big part of his success.
Score: 2 Votes (Like | Disagree)

amirite
AAPL is trading like old times again and is about to shoot up into the 140s.
Score: 2 Votes (Like | Disagree)

Macaholic868
The Oracle of Omaha has spoken.
Score: 2 Votes (Like | Disagree)
Read All Comments

Wednesday November 30, 2022 2:39 am PST by Sami Fathi
Geekbench scores allegedly for the upcoming "M2 Max" chip have surfaced online, offering a closer look at the performance levels and specific details of the forthcoming Apple silicon processor. The Geekbench results, first spotted on Twitter, are for a Mac configuration of with the M2 Max chip, a 12-core CPU, and 96GB of memory. The Mac listed has an identifier "Mac14,6," which could be...
Read Full Article • 209 comments

Wednesday November 30, 2022 10:09 am PST by Juli Clover
Apple today released iOS 16.1.2, another minor bug fix update that comes one week after the release of iOS 16.1.1 and three weeks after the launch of iOS 16.1, an update that added support for iCloud Shared Photo Library, Matter, Live Activities, and more. The iOS 16.1.2 update can be downloaded on eligible iPhones over-the-air by going to Settings > General > Software Update. According...
Read Full Article • 112 comments