Samsung chief Jay Y Lee has been arrested over his alleged role in an influence-peddling scandal that reaches to the highest levels of the South Korean government, it was reported on Friday.

Reuters said the 48-year-old vice-chairman and heir-apparent of Samsung was taken into custody at the Seoul Detention Center on Friday morning, after waiting there overnight for the decision. 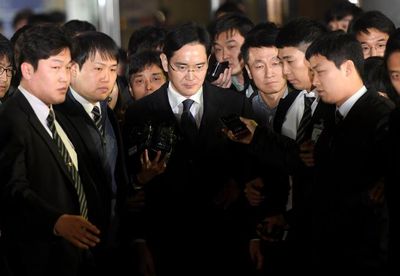 Image via Reuters
South Korea's special prosecutor's office accuses Lee of bribing a close friend of President Park Geun-hye – who is currently facing impeachment over the scandal – in order to win favors related to leadership succession at Samsung Group. Lee now faces charges including bribery, embezzlement, hiding assets overseas, and perjury. Both Geun-hye and Lee have denied wrongdoing in the case.

Prosecutors have up to 10 days to indict Lee, but they can seek an extension. After indictment, a court must then make its first ruling within three months. Currently there's no word on whether lawyers representing Lee will contest the arrest or seek bail.

Shares in Samsung ended Friday down 0.42 percent, in line with a flat wider market. Ratings agencies say they don't expect any impact on the company's credit ratings, claiming Lee's arrest will accelerate improvements in corporate transparency and governance.

Meanwhile, Lee's arrest is not expected to hamper day-to-day operations at Samsung's divisions, which are run by professional managers. That said, the conglomerate is currently going through a restructuring to clear a succession path for Lee to assume control after his father suffered a heart attack in 2014, suggesting strategic decision-making on the issue could be affected.

Lee's detention comes as Samsung tries to resuscitate its Galaxy brand following last year's Note7 debacle, in which the handsets were prone to setting on fire whilst charging. The company is hoping that its Galaxy S8, expected to launch in April, will bring the brand back on course in a crucial year when Apple is expected to announce a "tenth anniversary" iPhone 8, for which Samsung will also provide 160 million OLED display panels.

and here I thought the head of Samsung would be arrested for battery.

Keniutek
You don't make billions by being nice and just. Every government and every big company is corrupted, no doubt in my mind.
Score: 34 Votes (Like | Disagree)

Evil Spoonman
Samsung is a fascinating company. They absolutely have fantastic engineering teams, and lofty technologies that are worthy of our appreciation. They haven't become this valuable and this well regarded for no reason. So anybody throwing Samsung in the dirt just because they are "the competition" and often behave unethically isn't being nuanced enough.

What seems to fall apart repeatedly is their management and product layer. Samsung products that don't need any extra design to be good are often really rather good. SSDs, displays, and so forth. The products that need to be designed to be more than just a collection of parts are consistently lacking. Phones, laptops, etc.

Samsung's management team, including product management, simply are prototypical of the worst style of management. Political, amoral, bureaucratic, committee-driven, lacking in vision or resolve. And here it bites them again. We shouldn't be surprised. But we should feel bad for the engineers who create amazing things at Samsung, but never get to share them properly.
Score: 34 Votes (Like | Disagree)

meaning-matters
The world of politics is full of this, but they call it lobbying.
Score: 18 Votes (Like | Disagree)

HiRez
I'm actually kind of surprised this happened, considering the Lee family's hold on everything in the country, including the government. Then again, it's not the first time members of the family have been indicted, they just get pardoned later and I assume the same will happen here. For the wealthy elite, this is all just theater, they present the appearance of being in trouble to make it look like the government is keeping an eye on things, but they'll soon be back to their regular lives embezzling, giving and taking bribes, and so on.
Score: 14 Votes (Like | Disagree)
Read All Comments