Apple is having a good Valentine's Day, as its shares traded above $134.54 today, eclipsing a previous all-time intraday high set in April 2015. 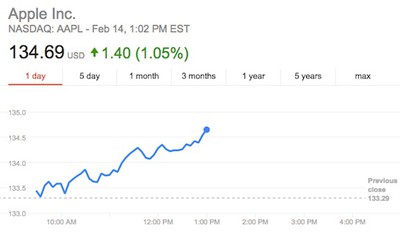 Apple's market value has now surpassed $700 billion, making it the world's most valuable company by a sizeable margin. Google parent company Alphabet is second largest with a market cap of around $575 billion, followed by Microsoft at around $500 billion and Berkshire Hathaway at around $412 billion.

The milestone comes just one day after Apple's stock recorded its highest closing price ever of $133.29 on Monday. Following Apple's first annual revenue decline since 2001, its stock been steadily rising over the past four months, buoyed by record-breaking earnings results at the end of January.

When adjusted for a 7-for-1 split in June 2014, Apple's stock is trading at roughly $942, approaching the $1,000 milestone that was considered wishful thinking when some analysts predicted it years ago. Apple is also slowly but surely on track to become the world's first trillion dollar company.

Apple analysts Brian White of Drexel Hamilton and Steven Milunovich of UBS, and former analyst turned venture capitalist Gene Munster, are among a larger group of observers who believe Apple's stock remains undervalued and is likely to rise. AAPL is up over 50% compared to its 52-week low of $89.47 in May 2016.

Update: Apple's stock price ultimately closed at a record $135.02 after hitting $135.09 a few minutes before the close. The stock has continued to rise slightly in after-hours trading.

There, now dozens of people don't have to waste their time typing that up.
Score: 17 Votes (Like | Disagree)

WiseAJ
and its still undervalued
Score: 17 Votes (Like | Disagree)

The title of the article should read, Highest since split. Apple stock has been worth far more in the past.

They have taken that into account. This is the highest the stock has been ever.

Pre split the price would be $945 which is never reached prior
Score: 12 Votes (Like | Disagree)

I have four words for you: I love this company.

Why would somebody love a company?
Score: 11 Votes (Like | Disagree)
Read All Comments

Monday August 2, 2021 9:34 am PDT by Juli Clover
Apple is preparing for a slew of fall product launches according to new filings that showed up today in the Eurasian Economic Commission database. There are listings for new Mac and Apple Watch models, all of which have previously unknown model identifiers that indicate that they're upcoming devices. There are six new Apple Watch identifiers, including A2473, A2474, A2475, A2476, A2477, and...
Read Full Article • 121 comments

Monday August 2, 2021 3:22 am PDT by Tim Hardwick
YouTube is piloting a new cheaper subscription tier in Europe called "Premium Lite," which offers ad-free viewing minus YouTube Premium's other features. First spotted by a user on ResetEra and subsequently confirmed by Google, the "Lite" plan means users who aren't interested in offline downloads or background playback can still enjoy YouTube videos on web and mobile app without being...
Read Full Article • 136 comments