Apple is developing a new ARM-based chip for its Mac lineup that would "take on more of the functionality" handled by Intel processors, reports Bloomberg.

In development since last year, the chip, codenamed T310, is said to be similar to the chip used to power the Touch Bar in the new 2016 Macbook Pro. It's built using ARM technology and will work with the standard Intel processor, handling "Power Nap" low-power mode functionality. 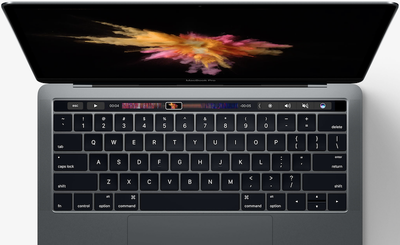 Apple engineers are planning to offload the Mac's low-power mode, a feature marketed as "Power Nap," to the next-generation ARM-based chip. This function allows Mac laptops to retrieve e-mails, install software updates, and synchronize calendar appointments with the display shut and not in use. The feature currently uses little battery life while run on the Intel chip, but the move to ARM would conserve even more power, according to one of the people.

Apple's 2016 MacBook Pro uses an independent ARM-based chip called the T1 to power the Touch Bar, the Touch ID fingerprint sensor built into the Touch Bar, and the secure enclave that stores payment and biometric data.

According to Bloomberg's report, the upcoming ARM-based chip will "go further," connecting to storage and wireless components to take on additional power management capabilities.

Apple could begin using the new chip in an upgraded version of the MacBook Pro set to launch later this year, but it could be introduced as a quiet update with little fanfare as the chip that powers the Touch Bar was not promoted by Apple.

Despite Apple's plans to offload some tasks to a new ARM chip, Apple is said to have no intention of abandoning Intel chips in its laptop and desktop computers.

mlrproducts
Or you know, instead of devoting more resources to this project, they could just put a *GASP* normal-sized battery in their laptops (and make them slightly thicker) and use those resources to update the Mac Pro, Mini, etc...
Score: 52 Votes (Like | Disagree)

MysteriousStain
Great news. Now just make it a bit thicker, allow us swap out ram and drives and put in a decent GPU.
Score: 41 Votes (Like | Disagree)

Amacfa
Looks like the Apple-is-Doomed circlejerk is going to need some extra courage in the coming months.
Score: 23 Votes (Like | Disagree)

Or you know, instead of devoting more resources to this project, they could just put a *GASP* normal-sized battery in their laptops (and make them slightly thicker)

Thursday May 13, 2021 10:32 pm PDT by Sami Fathi
A new rumor suggests that Apple will announce the third-generation AirPods and the recently rumored HiFi, or high-fidelity Apple Music tier, on Tuesday, May 18, via a press release on its website. The new rumor comes from Apple YouTuber Luke Miani who shared the alleged exclusive news with the AppleTrack website. According to the YouTuber, Apple plans to release the next-generation AirPods...
Read Full Article • 176 comments

Friday May 14, 2021 11:52 am PDT by Juli Clover
Following the discontinuation of the iMac Pro, Apple also appears to be discontinuing Space Gray "Magic" accessories that it sold separately alongside the iMac Pro. The iMac Pro was the only Space Gray Mac, and Apple designed special matching accessories for it. The Space Gray Magic Mouse 2, Magic Keyboard, and Magic Trackpad all now say "While supplies last" in small wording at the bottom...
Read Full Article • 318 comments

Saturday May 15, 2021 11:08 am PDT by Juli Clover
Twitter has been working on some kind of subscription service since last summer, and Jane Manchun Wong, who often digs into new features coming in apps, has shared details on just what Twitter is exploring. Twitter's subscription service could be called Twitter Blue, and at the current time, it's priced at $2.99 per month. There will be a "Collections" section that allows users to save and...
Read Full Article • 102 comments