Since iOS 10.1, when a user opens an old 32-bit app on a newer iPhone, iPad, or iPod touch, Apple has reinstated a warning that the app may slow down the device until the developer updates it to improve its compatibility. The apps are still fully usable, however, despite the possible performance issues. 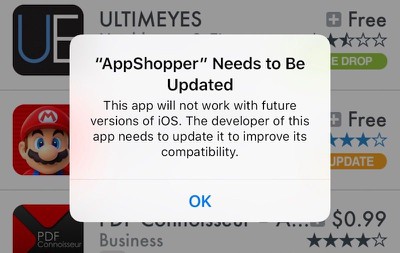 On iOS 10.3 beta, Apple has tweaked the wording of that warning to note that 32-bit apps "will not work with future versions of iOS," suggesting that iOS 11 could be the first software update to support 64-bit apps only. "Future versions" is unsurprisingly vague, however, so the exact timeline remains unclear.

Apple has supported 64-bit apps since the iPhone 5s launched in September 2013. The company required that all new apps support 64-bit architecture as of February 2015, and all updated apps since June 2015, but a number of older 32-bit apps that have not been updated in years remain available on the App Store.

In September, Apple said it would begin removing problematic and abandoned apps from the App Store, including those that no longer function as intended or follow current review guidelines, and others lacking compatibility updates for a long time. By October, it was reported some 50,000 apps had already been removed.

dannyyankou
Before people are too critical of Apple-

They're being generous for letting 32 bit apps work 2 years after the deadline.
Score: 28 Votes (Like | Disagree)

I play several games that haven't been updated. They're 'worth' it to me.
Score: 25 Votes (Like | Disagree)

WilliamTM
That kinda sucks...I've got a really old game that I enjoy playing to pass the time but it's not been updated since the days of the iPhone 5. :(
Score: 21 Votes (Like | Disagree)

This is probably intentional. If an app isn't worth a recompile, it probably isn't worth staying on the app store.
Score: 20 Votes (Like | Disagree)

d5aqoëp
To think of it from a DRM perspective, all those 32 bit apps you purchased... you will have no access to them because Apple axed 32 bit all together. That's DRM. Your purchases are not yours after all. You are at the mercy of the company who enforces the DRM.

Developers being lazy is not a valid reason. Not everyone has to be like Facebook to routinely update their app with junk lines of code and keep on bloating it till it explodes.

I will have to upgrade my 5 year old CCTV camera system which will cost me $1000 because their remote app is 32bit and very old. It may stop working in iOS 11.

Vashetti
Looking forward to seeing millions of 32-bit apps disappear from the store because the developers don't see it as worth the cost to update
Score: 18 Votes (Like | Disagree)
Read All Comments