During the iOS 10 beta testing period, Apple added an alert message to notify users who downloaded an older 32-bit app that it could affect system performance, but the warning message does not appear to have made it into the final version of iOS 10 that was released to the public.

Starting in iOS 10.1, Apple is reinstating the warning message, with a more dire alert that will likely steer customers away from apps that have not complied with Apple's 2015 mandate stating all apps must be 64-bit. As can be seen in the alert below, the message now warns that an app "may slow down your iPhone." It goes on to say "The developer of this app needs to update it to improve its compatibility." 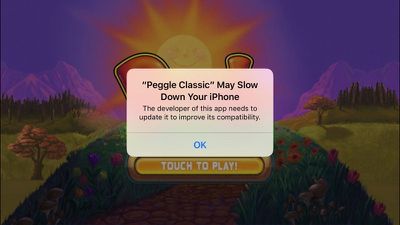 During the iOS 10 beta testing period, the alert instead warned 32-bit apps were "not optimized for iOS 10" and usage "may affect overall system performance."

Starting in late 2013, Apple began asking developers to submit 64-bit apps for the iPhone 5s, the first iPhone with a 64-bit processor. On February 1, 2015, Apple made 64-bit support mandatory for all new app submissions, and on June 1, 2015, all app updates submitted were required to include 64-bit support.

Apps that are popping up warnings in the iOS 10.1 beta are apps that have not been updated since that time.

Apple has likely reinstated the 32-bit alert message as part of its crackdown on older, outdated apps to clean up the App Store. In early September, Apple notified developers about an upcoming plan to remove apps that have not received compatibility updates, do not comply with current review guidelines, or that no longer function as intended.

Notices started going out on September 7, with developers given a 30 day period to fix problematic apps. After that period, Apple will be removing outdated apps from the App Store.

Andres Cantu
Good. No reason why apps should not be 64-bit compatible. It's been three years.

While we're at it, all apps should be optimized for all resolutions as well.
Score: 27 Votes (Like | Disagree)

weup togo
64-bit aside, don't play into Apple's spin that an app that hasn't been updated in a year is "outdated." This is a poisonous concept designed to screw users and developers alike by constantly driving churn on the app store. There were games written 30 years ago that still worked in Classic.

Apple is supposed to be a platform vendor. Platforms are supposed to be stable. But instead they're successfully convincing the apologists that only new things are good, and every not new thing is bad. Customers who buy into this are only hurting themselves.
Score: 20 Votes (Like | Disagree)

Also the message is too vague. Will the app run poorly, or will it somehow drag down the performance of the whole phone?

The message is deliberately vague. Marketing fine tunes the wording of these dialogs to perfection. They are trying to scare users into being angry at developers.

Apple Engineering benefits when every app is recompiled every year on the newest SDK because it guarantees adoption of all sorts of behaviors that apps are opted into automatically. As long as there is this long tail of apps compiled with older tools against older SDKs, Apple has to choose between maintaining backward compatibility with older implementations and breaking apps outright. They have no problem breaking apps here and there, but they don't have the courage yet to do it outright for large classes of popular apps.

They know from usage metrics that there are still too many people using apps like Peggle for them to get away with outright breaking them, because the mainstream press would take notice. So instead they resort to FUD alerts designed to confuse and frighten users into abandoning their favorite old apps, and shaming developers into diverting their effort into changes for apps that are no longer profitable. It's an ugly scene, and everyone is being played.
Score: 13 Votes (Like | Disagree)

WestonHarvey1
It will slow your entire phone down? Or just perform poorly while it is running? That message is pretty dire.
Score: 10 Votes (Like | Disagree)

LordQ
Good. When are they removing legacy apps from the App Store?
Score: 10 Votes (Like | Disagree)
Read All Comments