After the AirPods launched online and then arrived to the first set of customers earlier in December, some users have begun realizing that the charging case that comes with the headphones isn't holding Apple's advertised 24 hours of charge. In theory, the charging case should only lose noticeable amounts of charge when the AirPods are low on battery and recharging within the case, and when users flip the pack open to check battery levels or otherwise activate Bluetooth with a connected Apple device.

The unlucky set of users facing the battery issues, however, are noticing that the AirPods case drains by upwards of 40 percent in mere hours, with the AirPods at 100 percent inside and minimal Bluetooth activation.

While some feared this is just the way Apple intended the headphones and companion charging case to work, Redditor severinskulls has posted about his experience with the problem, and the replacement AirPods he got that do not have an apparent faulty charging case. In most cases, the AirPods themselves are not facing any shortened battery life issues. 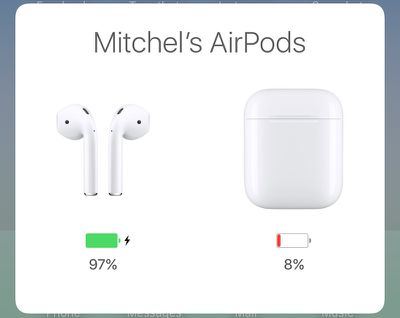 I was having the exact same issue you had. Airpods in case, go to bed with full charge and waking up with 15%-20% of the case charge gone. Thats a full charge cycle for the airpods themselves!

I spoke to apple support online. They had no answer how long the charge of the case should last when the airpods are not in use. They made an appointment for me instore as all diagnostics at the moment are being handled instore they said. Cut to this morning, go in for my appointment. The genius was very friendly. I was his first airpods case. Turns out he also has no info on whether this rate of the battery draining is normal. He said that definitely they are designed to lose charge over time as cycling the charge improves the health of the airpod batteries. However as I pointed out, going from a full charge to empty in two days while they are sitting there unused seems way too fast. To be safe, he placed my airpods. So i got a brand new pair.

Sooooo I just checked. Airpods and case were 100% at 9pm last night. Checked just now at 9am the next morning and they are STILL at 100%, both the pods and the case. I had bluetooth on my phone on all night too. With the other pair in the same situation, I would have lost 14-20% charge by now.

So there we go, case closed (pun?), there is a battery life problem suffered by the airpods. I'm going to write back feedback to apple now. You should get your airpods replaced because they shouldnt lose as much charge as what youre experiencing.

When the AirPods first came out, the initial impressions of the battery life for both the headphones and the charging case were overall positive. A handful of MacRumors forum members were fans of the speedy charge rate of the AirPods, the granular settings of the iOS battery widget, and the battery life of the charging case as well. Mentions of battery drainage issues with the AirPods case began about a week ago, around the time the first customers had been using the headphones for a few days.

In a teardown last week by iFixit, it was theorized that the Charging Case was the cause of the AirPods' delay from October to December. The root of the problem was a few empty spaces discovered within the solder joints of the case's chip. This is referred to as "voiding," which iFixit said "could be evidence of low quality standards, or a rushed product release."

The exact scope of the affected AirPods user base is unclear. Some users are speculating that the problem could be an initial charge cycle hiccup that irons itself out over time, but a few owners that have had the AirPods since day one are still posting about battery drainage issues with the charging case today. On the other hand, there are many other users who have reported normal experiences with the case and its advertised 24 hours of battery life. Apple hasn't commented on any of the reports.

idark77
Another Product, Another Gate...
Score: 23 Votes (Like | Disagree)

Another Product, Another Gate...

Yep, here comes the MR brigade to trash this product into irrelevancy (non-owners, by the way). Fun!
Score: 21 Votes (Like | Disagree)

kevinkyoo
I feel no sympathy for anyone who bought the first batch of these. Looking at the track record of Apple with its products this year, this isn't any surprise.
Score: 14 Votes (Like | Disagree)

Oh for crying out loud.

This is how its supposed to work. The case charges the AirPods. I know its hard to believe, but that causes the case battery to drain :eek:

Might want to re-read the article more carefully. Key bit...

The unlucky set of users facing the battery issues, however, are noticing ('https://www.reddit.com/r/apple/comments/5k3gwg/any_on_else_getting_bad_battery_life_on_airpod/') that the AirPods case drains by upwards of 40 percent in mere hours, with the AirPods at 100 percent inside and minimal Bluetooth activation.

In other words, they are not putting drained Airpods in the case and then drawing down power from the case to charge them back up. They are already charged up to 100%. Conceptually, the case should be discharging as little as no stored energy, but some users are reporting up to 40% in "mere hours" in this scenario.
Score: 12 Votes (Like | Disagree)

Snagged a pair from ATT,

Offered them to my nephews/niece for Christmas... nobody wanted them.

vmachiel
Everybody is feeling 2016, even Apple
Score: 8 Votes (Like | Disagree)
Read All Comments

Tuesday January 24, 2023 1:11 pm PST by Joe Rossignol
While the new Mac mini with the M2 chip has a lower $599 starting price, the base model with 256GB of storage has slower SSD read and write speeds compared to the previous-generation model with the M1 chip and 256GB of storage. A teardown of the new Mac mini shared by YouTube channel Brandon Geekabit reveals that the 256GB model is equipped with only a single 256GB storage chip, while the...
Read Full Article • 526 comments