When Apple debuted its AirPods in September, the company said the wireless earbuds would launch in late October. Now that it's late October, people have been wondering if a release is imminent, but as it turns out, the AirPods are delayed.

Apple today told TechCrunch that it needs "a little more time" before the AirPods are ready for a public release, without specifying the reason behind the delay. 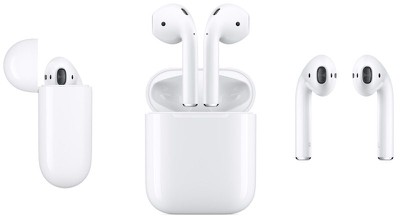 "The early response to AirPods has been incredible. We don't believe in shipping a product before it's ready, and we need a little more time before AirPods are ready for our customers," an Apple spokesperson said to TechCrunch.

Apple did not provide TechCrunch with updated launch information, so it is no longer clear when the AirPods will be available for purchase.

AirPods are Apple's premium headphone solution for the iPhone 7 and the iPhone 7 Plus, which do not include a headphone jack. AirPods, powered by Bluetooth and an Apple-designed W1 chip, are entirely wireless with no cords between them.


They include advanced features like infrared sensors to detect when they're in the ear, beam forming microphones to reduce external noise, and accelerometers to respond to touch gestures.

AirPods have been in the hands of reviewers since September and have garnered largely positive reviews for the fit, the features, the simple setup, and the easy recharging.

BobertKennedy
Airpods are a cruel joke to keep you going back for more.

Moriarty
I guess Apple lost them all.
Score: 27 Votes (Like | Disagree)

thefredelement
Oh man, BUT I NEEDED THEM.
Score: 26 Votes (Like | Disagree)

Icaras
Bummed out about the news! I was really looking forward to getting these, but a least my ears won't blow up now :eek:
Score: 23 Votes (Like | Disagree)

ginkobiloba
"AirPods are Apple's premium headphone solution for the iPhone 7 ('https://www.macrumors.com/roundup/iphone-7/') and the iPhone 7 Plus"

Maybe premium in price and in wireless connectivity, but certainly not premium in sound quality.
Score: 23 Votes (Like | Disagree)
Read All Comments

Wednesday June 16, 2021 7:11 am PDT by Hartley Charlton
With no sign of redesigned MacBook Pro models at this year's WWDC, when can customers expect the much-anticipated new models to launch? A number of reports, including investor notes from Morgan Stanley and Wedbush analysts, claimed that new MacBook Pro models would be coming during this year's WWDC. This did not happen, much to the disappointment of MacBook Pro fans, who have been...
Read Full Article • 227 comments

Wednesday June 16, 2021 10:49 am PDT by Juli Clover
Apple CEO Tim Cook this morning participated in a virtual interview at the VivaTech conference, which is described as Europe's biggest startup and tech event. Cook was interviewed by Guillaume Lacroix, CEO and founder of Brut, a media company that creates short-form video content. Much of the discussion centered on privacy, as it often does in interviews that Cook participates in. He...
Read Full Article • 315 comments