AirPods Teardown Reveals Charging Case May Have Been Cause of Delay

iFixit today published a teardown of Apple's AirPods, uncovering the internal components of both the AirPods themselves, and the charging case that comes with the headphones. Throughout the teardown, iFixit discovered a "hot mess" of close knit components within each AirPod, along with a few "quality issues" within the charging case that may be the reason for the months-long delay of the wireless headphones.

Starting with the AirPods, iFixit separated the speaker portion of the pod from the rest of the device, comparing the tightly-packed internals to the Apple Watch teardown. Further investigating uncovered a miniature coaxial cable and two IR proximity sensors, which allow the AirPods to detect whenever they're inside an ear, and play/pause music accordingly. 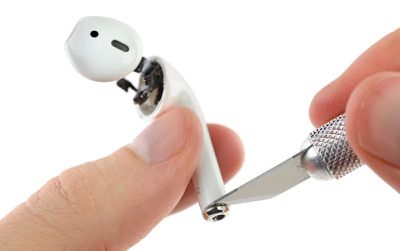 Blocked by more glue and cables in the speaker portion of the AirPods, iFixit turned to the "stem" only to find "a waterfall of glue" inside the base section of the device. Just behind the metallic bottom area of each AirPod -- which provides the contact point for charging in the case -- the site uncovered the end of the battery cable underneath the wall of adhesive.

That shiny metal cap provides contact points for charging the AirPod, and surrounds the primary microphone. Hidden behind and within the torrent of glue, we spy the end of the battery cable.

If jamming complex components into a small form factor and sealing it with a copious amount of glue were a game, Apple would be winning.

Cutting open the AirPods completely, iFixit eventually separated the antenna from the battery, theorizing that the "hanging boom is for more than just balance—it's also to improve reception." The earpiece of each AirPod is a 93 milliwatt hour battery, "equivalent to a little over 1% of the charge capacity in an iPhone 7."

Although the site could extract some basic components of the charging case without total destruction -- including the status LED -- it eventually had to resort to using a rotary saw in order to get behind the "impenetrable" shell. Discovered underneath was the case's battery, a 1.52 watt hour lithium-polymer cell that's around 16 times the power capacity of a single AirPod. iFixit equates this to around eight full recharges of the AirPods within the charging case.

iFixit took a few x-ray shots of the charging case's internals, and found "quality issues" within the chip's solder joints. A few empty spaces can be seen, referred to as "voiding," which iFixit said "could be evidence of low quality standards, or a rushed product release." This suggests that the source of the AirPods' delay was with the charging case and not with the AirPods.

The repairability score of the AirPods was ultimately rated at a lowest-possible 0/10, thanks to the copious use of glue as a fastener within most of the components of the AirPods, and the case's resistant outer shell.

Check out the rest of iFixit's teardown to see more internal exploration of the charging case's sync button, lightning connector, and a few more x-ray images of both the case and the AirPods.

69Mustang
Normally, I'm against the glue/solder everything to within an inch of it's life. In the case of the AirPods, I think it was the best move made by Apple. The water resistance of these things is... well, pretty damn incredible. Imo, the glue is a functional part of the AirPods. I don't even like BT headphones and like the look of the AirPods even less. They're ugly as sin to me. But the construction is supremely impressive. Hat Tip to 9to5Mac. Here's what I'm rambling about:
Score: 19 Votes (Like | Disagree)

gnipgnop
iFixit certainly does a lot of editorializing and speculation regarding Apple products. A single unit with "voiding" in the solder doesn't really provide much evidence of anything regarding the delay.
Score: 18 Votes (Like | Disagree)

profets
Pretty intense how much is stuffed into these devices.
Score: 15 Votes (Like | Disagree)