AirPods Launch on Apple Store for $159 With December 21 Delivery

Apple's AirPods are now available to order from the company's online store for $159.00, following weeks of speculation on exactly when the wireless headphones would launch. Originally, the AirPods were going to debut in "late October," but Apple delayed the launch for unspecified reasons.

In the official press release, Apple mentioned that the AirPods will begin arriving at Apple retail stores, Apple Authorized Resellers and select carriers beginning sometime next week. Shipment will begin in "limited quantities" at launch, and Apple encourages customers to continue checking its online store for updates on availability and shipping estimates. 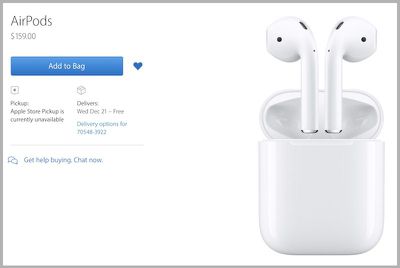 Now, users can order the Bluetooth-enabled headphones, which provide up to 5 hours of music playback and high-quality sound through a "seamless and automatic connection" between the AirPods and an iPhone. To charge the AirPods, the included travel case doubles as a charging station that provides up to 24 hours of battery life for the headphones.

The new W1 chip inside the AirPods allows for seamless connection with devices in Apple's ecosystem, so that they connect instantly whenever the rechargeable battery case is flipped open near an iOS device. When in the user's ears, the AirPods "know when you are listening" and will subsequently pause music when they're taken out of an ear. Playback controls are left to Siri-enabled voice commands, which are brought up by double-tapping on the buds.

Included with the AirPods is a Lightning cable used to charge the carrying case, and the headphones require Apple devices running iOS 10, watchOS 3 or macOS Sierra. Buy your own AirPods now at Apple.com for $159.00. Deliveries are currently estimated to begin arriving on December 21 in the United States.

Update 7:16 AM: Delivery estimates in the U.S. have slipped to December 29.

AirPods are a part of the move to a new paradigm in computing.

Before the iPhone, a phone or even a PDA were inferior to a laptop. Nobody could imagine how such a small screen could be just as productive as a full computer, how a phone could access the "real internet" and not some WAP limited version. The iPhone introduced a new paradigm on how we interact with computers. We didn't need a mouse and cursor UI and a large physical keyboard. Multi touch gestures and apps designed for the small screen made productivity on a phone possible. Eventually, most people stopped having to carry around laptops for everything. For them, a slab of glass in their pockets fulfills their computer needs.

That takes us to ubiquitous wearable computing. Again, we're seeing critics suggest that a small screen on a Watch or no screen in AirPods can never outdo a touch screen of an iPhone. That's because they're trying to imagine how a multi touch user interface can fit on a small Watch face just like the generation before tried to imagine a mouse and cursor UI with desktop designed apps on a PDA.

The new paradigm is an omnipresent voice based UI. Apple Watch was the first step to a Siri based user interface very much like in the movie "Her".

I can raise my wrist and issue a command or ask a question. It's become such a daily part of my life that I've forgotten how it's not a usual thing yet. People see me talking to my wrist to set the lights in my house to get ready for dinner and they stare at me like: "did you just do that?"

What has been missing is reliable voice feedback. That's where AirPods comes in. Fast forward to 2 or 3 generations of AirPods and Apple Watches down the road and Siri will be built-in to both devices and independent of an iPhone. You'll be able to ask Siri questions and issue commands like you do to a real life assistant. Video and picture activities could be AirPlayed to a nearby display such as a TV or an iPad if you have one nearby.

In the meantime, today, with AirPods and AppleWatch, I'll be able to leave my phone at home for limited uses such as going to the gym or taking my dog for a walk in the neighbourhood. I'll have my music and will still get intermittent access to my information as I pass WiFi hotspots along the way or reach a cafe or the gym which I'm logged in to.

I look forward to seeing this new paradigm grow like multi touch UI did after Steve introduced the iPhone in 2007.
Score: 13 Votes (Like | Disagree)

They're not for me, but I hope everyone excited by these enjoys them.
Score: 13 Votes (Like | Disagree)

Who in their right mind would spend that kind of money on these stupid headphones that are guaranteed to be lost within days?

You have to be stupid to suddenly lose the air pods. Thats why they come with a charging case. if they aren't in my ears they won't be suddenly just left on the side.
Score: 12 Votes (Like | Disagree)

rock6079
Just stumbled on this by coincidence on apple's site about 20 minutes ago! Ordered two :) Can't wait!

Who in their right mind would spend that kind of money on these stupid headphones that are guaranteed to be lost within days?

I don't know, responsible adults who can actually keep track of their possessions? That's just off the top of my head.
Score: 10 Votes (Like | Disagree)
Read All Comments

Tuesday November 29, 2022 11:54 am PST by Juli Clover
An unnamed 27-year-old man who purchased 300 iPhones from Apple Fifth Avenue on Monday morning was robbed shortly after leaving the store, according to 1010Wins Radio in New York. He was carrying 300 iPhone 13s in three bags and walking to his car at 1:45 a.m. when another car pulled up next to him. Two men jumped out and demanded that he hand over the bags. Not wanting to hand over 300...
Read Full Article • 383 comments