AirPods Shipping Sooner Than Expected to Many Customers

AirPods became available for purchase on Apple's website on December 13, and customers who ordered quickly began receiving their shipments as early as December 19. Orders quickly became backlogged, however, and Apple's shipping estimate slipped to four weeks in less than two hours, and to six weeks by the following day.

For customers that ordered within the past nine days, the six-week wait potentially meant waiting until late January or early February to get the all-new wireless earphones. Fortunately, as is often the case, Apple is now shipping many of those orders sooner than expected, with some deliveries now slated for late December. 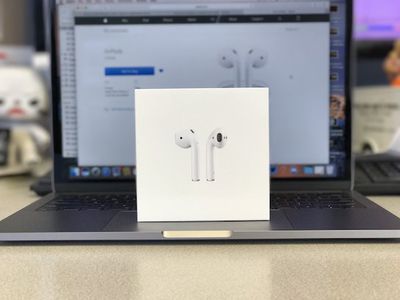 AirPods delivered to MacRumors forum member iPhenom
"Just received my shipping notice for my AirPod order," said MacRumors reader York in an email. "The original delivery date was January 12, but it should arrive on December 28th." Likewise, another reader with an original December 29 delivery estimate has now seen his AirPods ship with an estimated delivery date of December 23.

In the AirPods order tracking topic in the MacRumors discussion forums, a handful of other customers with estimated delivery dates ranging from December 29 to January 12 claim their AirPods have now shipped for delivery as early as this week. For some of those customers, AirPods will arrive just in time for Christmas.

With only three days remaining until Christmas, customers may now be pushing their luck to find AirPods in time for the holidays, but a lucky few have managed to find a pair at an Apple Store or place an order through resellers such as Best Buy and the United Kingdom's Carphone Warehouse over the past few days.


Other resellers such as Sprint and Verizon have unfortunately been less reliable, as some customers were able to purchase AirPods from these vendors only to later receive an email saying the order could not be fulfilled at this time. AT&T also has AirPods on sale, but it is unclear when orders will ship.

AirPods are Apple's all-new $159 wireless earphones. The cord-free earphones instantly turn on and connect to your iPhone, Apple Watch, iPad, or Mac when taken out of their charging case thanks to Apple's custom W1 chip. Likewise, audio automatically plays as soon as you put them in your ears and pauses when you take them out.

AirPods are controlled mainly by Siri. Doubling tapping an earpiece invokes Siri, and voice commands can be used to adjust the volume, change the song, make a call, and so forth. AirPods deliver up to 5 hours of listening time on one charge, and a 15-minute fast charge provides up to 3 hours of listening time.

Have yourself some merry little brain tumors.

"Bluetooth® earpieces have an SAR value of around 0.001 watts/kg (less than one thousandth the SAR limit for cell phones as set by the FDA and FCC)."

News flash: If you don't have anything meaningful to contribute, don't say anything :)
Score: 17 Votes (Like | Disagree)

Have yourself some merry little brain tumors.

Moronic mindless post. If you knew anything about medicine, you would know that you have just as much chance of developing a fatal gliobastoma or astrocytoma as those who use bluetooth earbuds or headphones. But don't worry. Most of those who develop these lesions can't be cured and then you won't have to worry about posting nonsense here.

"Siri is a somewhat big part of using these" ... yeah that's a big problem since Siri is just a step away from being worthless.

While not perfect, I love Siri. You are either just trying to be funny, which you aren't, or have never understood how to use Siri, not surprising given the mindset you display.

And if Apple didn't over deliver, I wonder what criticism you would have.

I fully understand that these airpods won't give me the sound quality of my high end speakers or some headphones, but for what they are designed to do, they are terrific. Too bad you have so much hatred in your heart.
[doublepost=1482425047][/doublepost]

Only the first page and the top rated messages are full of Apple hate. I'm surprised that "it may not be selling well" is missing.
Seriously though, if you are not being paid for tolling this site, why do you care so much about a company you don't like and products you will never buy?

Easy answer. So many here use this forum to express their hatred of life and their disappointment in themselves and what they haven't achieved in life. I actually feel sorry for them. Just think of how badly their lives will be.
Score: 16 Votes (Like | Disagree)

krause734
Have yourself some merry little brain tumors.
Score: 11 Votes (Like | Disagree)

I know you must be joking here. I smiled and continued to listen and enjoy my earbuds.
Score: 10 Votes (Like | Disagree)

Cutting edge technology fitted into an impossibly small package hidden away in simple and beautiful industrial design. And it all just works.

Everything from the way the AirPods are sucked into the case, to how the top opens and shuts, to how when you open it they pop up on your iPhone to pair, to how removing one turns off the music and putting it back in resumes. All effortless actions with little to no friction or need to learn.
Score: 8 Votes (Like | Disagree)
Read All Comments