Following the announcement of Apple's annual fundraising for World AIDS Day this morning, USA Today has now published a new interview with CEO Tim Cook, discussing the lengths Apple goes to in support of projects like PRODUCT(RED) and what it means to Cook personally. The fundraising will donate $1 to (RED)'s fight against AIDS for every purchase made with Apple Pay in an Apple Store, on Apple.com, or through the Apple Store app from December 1-6.

Cook said that the company "wanted there to be something for everyone" in terms of donating, learning about the issue at hand, or simply being excited for a new Apple accessory launch. There are four new PRODUCT(RED) items, including an iPhone 7 Smart Battery Case, iPhone SE Case, Pill+ Portable Speaker, and Beats Solo3 Wireless On-Ear Headphones. (RED) CEO Deb Dugan said that the company, combined with Apple's spotlight on the issue, has positively impacted the lives of 70 million individuals suffering from HIV/AIDS. 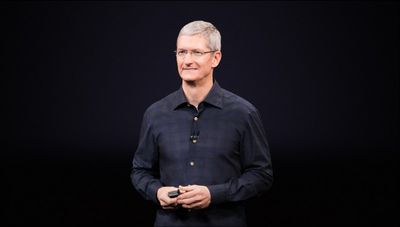 "We put our weight behind lots of things in the civil rights area," says Cook. "Similarly, I think it's key that people think about what they stand for and help their communities. We always say that we want to leave the world better than we found it. So, we try to thoughtfully decide how we can do that."

The topic of Donald Trump's upcoming presidency is briefly touched upon, centering around the possible negative ramifications for Apple and other more left-leaning tech companies. When asked if he's concerned whether Trump supporters would denounce Apple because of its anti-Trump viewpoints, Cook remained adamant that Apple -- and any company -- should retain a strong central value system, whether or not those values misalign with some of its customers.

Cook was also asked to address critics who claim that his stance domestically on certain issues, namely gay rights, is hypocritical given that homosexuality is a crime "in about a fifth of the 100-plus countries Apple does business in." Another point claims that the company's political leanings help generate more sales towards its younger millennial customer base.

"We'll always help the most people through our products, because they empower people to do great things themselves," he says. "But this (RED) partnership allows us to touch a group of people we normally wouldn't. Sub-Saharan Africa is not a big marketplace for us. This is about trying to lift people up."

"We haven't shied away from being visible on a number of topics, and if it's something in our wheelhouse, we'll always be visible and stand up to protect as well as advance people's rights," he says.

Apple and Tim Cook have supported, and fought for, a number of movements and causes over the years, most recently holding a fundraiser for Hillary Clinton, fighting for user privacy and security against the FBI, and marching in annual support of LGBT rights during the Pride Festival in San Francisco.

Cook's final note on Apple's bold stances was that he and the company don't intend to stop moving forward in the fight for acceptance, inclusiveness, and support in all of these areas and more. "Every generation has a responsibility of expanding the definition of those rights, to move forward. So we'll very much continue to do that."

I don't like Tim Cook as a replacement "visionary" CEO.

They're leaving behind too many of the products that made Apple great. They're breaking down the ecosystem by eliminating product lines such as the AirPort, which was just rated as the best router available. They're replacing their beautiful displays with lopsided plastic junk—much like they did with their uninspired beige boxes of the 90s. And their new products have been lacking in inspiration and features that make them worthwhile for the price. Siri can't compete, and as a whole Apple still hasn't figured out services very well. Pros are being left behind while they label iPads as "Pro" only because you can draw on them now. Jony Ive has pretty much checked out, designing golden EarPods for charity and Christmas trees for some reason.

Something must change. We need to make Apple great again!
Score: 32 Votes (Like | Disagree)

jdillings
This illustrates everything that is wrong with the Tim Cook era...instead of focusing on great products, he focuses on social issues. Ask yourself, how many times has Tim Cook in the last year discussed the Mac Pro versus discussing social issues?
Score: 17 Votes (Like | Disagree)

but dude you gotta stop with these interviews

Why? He's one of the few CEOs to be so vocal about human rights and decency. It's refreshing to hear a CEO say that besides dwelling on profits. Obviously, there are still aspects of Apple's own operation that could benefit from that vision. But it does seem as if Cook is gradually pushing the whole company (and perhaps the industry) in a more inclusive and sustainable direction.
Score: 12 Votes (Like | Disagree)

Cineplex
Jesus, Tim! Shut up and make some products people want to buy. If you spent more time on products and less time playing social justice warrior Apple might be as good as it was in the 2000's!
Score: 11 Votes (Like | Disagree)

The fact that the MacBook Air still has that horrible low-res display and the MacBook still only has 1 usb-c port for charging and connectivity gives me AIDS.

shove it up your A tim cook.

You should be ashamed of yourselves.
Score: 8 Votes (Like | Disagree)

rizzo41999
I'm all for equality and fair practices, but dude you gotta stop with these interviews
Score: 8 Votes (Like | Disagree)
Read All Comments