Apple's latest operating system, iOS 10, is seeing quicker adoption rates than iOS 9 saw during the same adoption period last year, according to data collected by Mixpanel. As of 10:00 a.m. Pacific Time, 24 hours after iOS 10 was released, the OS is installed on 14.45 percent of devices.

Comparatively, 24 hours after iOS 9 was released, it was installed on 12.60 percent of devices, also based on data gathered from Mixpanel. That's also similar to iOS 8 adoption rates in 2014, suggesting iOS 10 is slightly outpacing both updates, likely due to the wide range of new features introduced. 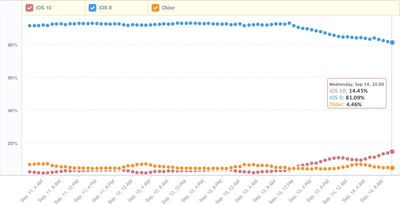 iOS 10 saw some early installation issues that have undoubtedly made people weary of downloading the update and have slowed adoption rates.

Shortly after iOS 10 was released, users began seeing their installations fail, requiring them to connect to a computer to repair the installation or restore via iTunes. Apple fixed the issue within an hour, but not before it impacted hundreds.

Since then, iOS 10 has installed smoothly and we've seen few bug reports, suggesting it's stable and safe to download. iOS 10 adoption will likely jump up as we hit the weekend, as people will have time to do the installation, and with the iPhone 7 releasing on Friday, there will be millions of new devices running the operating system.

ghostface147
I stealth updated my wife's last night when she went to bed. She wasn't happy, but wasn't totally unhappy. Such is the married life.
Score: 27 Votes (Like | Disagree)

How many of those regret it though when they realise they can't swipe to unlock anymore?

I haven't swiped to unlock my phone since I got touch ID like... three years ago. I actually hadn't even though about that until I read your comment, and now it feels really weird to say.
Score: 15 Votes (Like | Disagree)

thekeyring
So it's overtaken Android M, despite Google's one year head start and all the flagship devices sold running the latest version.
Score: 14 Votes (Like | Disagree)

A7ibaba
I must confess that my iPhone 6 is really faster and snappier with iOS 10 than iOS 9.
Score: 11 Votes (Like | Disagree)

kirky29
How many of those regret it though when they realise they can't swipe to unlock anymore?
Score: 10 Votes (Like | Disagree)

geoff5093
Apple loves early adopters, yet people here think installing a new update which breaks your phone is your problem and not Apple's.
Score: 8 Votes (Like | Disagree)
Read All Comments