iOS users are installing Apple's latest operating system at roughly the same pace iOS 8 was installed last year, according to multiple analytics companies that are tracking iOS 9 adoption rates. iOS 9 has now been available for download for just over 24 hours.

Mixpanel's live iOS 9 tracking site suggests iOS 9 is now installed on approximately 12.60 percent of devices, which is in line with iOS 8 adoption rates in 2014. 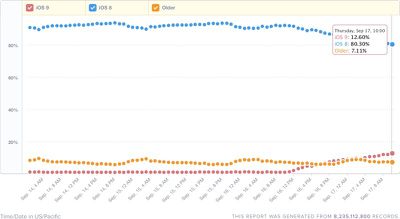 "iOS 9 has received 12% adoption in the last 24 hours and is being adopted similar to iOS 8 last year. This kind of adoption took Android's latest operating system, Lollipop, in comparison 5 months to achieve. One huge advantage Apple got right this year over last year was that the update is much smaller than last year (3.5x smaller) < Apple has empathy for its users who have nearly maxed out the space on their phones. However, one issue for it being substantially slow compared to iOS 7 is that servers are having trouble keeping up right now as people update."

Because each analytics site tracks a different selection of iOS users based on app installs, iOS 9 installation numbers vary quite a bit across platforms. All of the sites tracking iOS 9 adoption agree that it is on pace with adoption numbers seen after iOS 8 was released last year, however. Tapjoy is seeing adoption rates spanning from 4 percent to 7 percent, based on device, while Fiksu is seeing 6 percent of its users running iOS 9.

According to GoSquared, iOS 9 users now represent 12 percent of total iOS traffic, a number that's on par with both Mixpanel's count and an 11.84 percent measurement from analytics company Paddle.

Two years ago, iOS 7 saw much quicker adoption rates than we're seeing with iOS 9, but that is not surprising as iOS 7 marked the last major design update to the operating system. iOS 8 and iOS 9 brought many new features, but few visual changes.

What is surprising is that iOS 9 adoption is not outpacing iOS 8 adoption because iOS 9 has a much smaller installation size. While iOS 8 required 4.58 GB to install, iOS 9 only requires 1.3 GB, making it much more accessible to users who have little space open on their devices.

MattMJB0188
I am still honored to be running iOS 6.1.4 on my iPhone 5; enjoying fluidity, smoothness, and a classic look.
Score: 21 Votes (Like | Disagree)

Saucesome2000
Most people I know are waiting until the weekend because they are phones they use for work. I expect this number to grow a lot by Monday. I updated the moment it was released and it's been running great so far.
Score: 11 Votes (Like | Disagree)

HiRez
Easily explained because of people's horrific upgrade experiences with iOS8. That screw-up is going to take a long time to forget.
Score: 10 Votes (Like | Disagree)

1961 Scout
Dropped 9 on my old ipod 5. I am getting way more battery life now. Once the word gets out on the battery life it's going to take off...
Score: 8 Votes (Like | Disagree)

JackANSI
After the slightly bumpy iOS 8 release, this is surprising.

localman
There's a few ways to read that second graph. Here's mine based on my personal experience: the iOS 7 update was so painful that I am much more cautious to read others' experiences now before upgrading. That release greatly reduced my iPhone 4S performance, and I ended up not appreciating the UI changes either.

iOS 9 looks to be a good update from what I've read so far, but I'll probably wait a few more days.
Score: 6 Votes (Like | Disagree)
Read All Comments