Apple today released the eighth beta of macOS Sierra, the newest operating system designed for the Mac, to developers. Public beta testers have also been provided with their seventh beta version. macOS Sierra beta 8 comes one week after the release of the seventh beta and more than two months after the software was first unveiled at Apple's 2016 Worldwide Developers Conference.

Developers and public beta testers can download today's update through the Software Update mechanism in the Mac App Store. Developers can also download the beta from the Apple Developer Center. 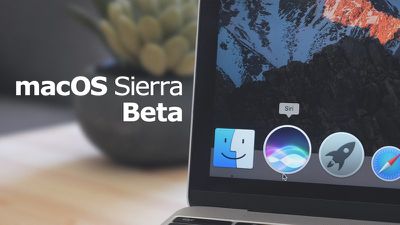 Subscribe to the MacRumors YouTube channel for more videos.
macOS Sierra is currently available to developers and public beta testers, and it will see a wider public release this fall, with Apple possibly announcing a release date at its September 7 media event. For full details on all of the new features included in macOS Sierra, make sure to check out our macOS Sierra roundup.
Related Forum: macOS Sierra
[ 95 comments ]

towg
If Safari carries on getting snappier at this rate it'll be opening before I click the icon.
Score: 11 Votes (Like | Disagree)

gsmornot
There is no guessing this beta schedule.
Score: 7 Votes (Like | Disagree)

SandboxGeneral
Sheesh, lol, I just got around to updating last weeks release 2 days ago. I just updated today's release an hour ago so now I'm up-to-date again. Nice to see them pushing updates frequently and hopefully fixing many things.

So far, even since the first PB release Sierra has been exceptionally stable for me.
Score: 6 Votes (Like | Disagree)

SoyCapitanSoyCapitan
Does Sierra let us use split view without creating a new virtual desktop or do we have to wait for 10.18 Mount Trump?
Score: 5 Votes (Like | Disagree)
Read All Comments