Apple Invites Media to September 7 Event: 'See You on the 7th'

Apple today sent out media invites for an iPhone-centric event that will be held on Wednesday, September 7 at 10:00 am at the Bill Graham Civic Auditorium in San Francisco, California. Media invites (via The Verge) offer up a first look at the theme of the event and feature the simple tagline: "See you on the 7th." 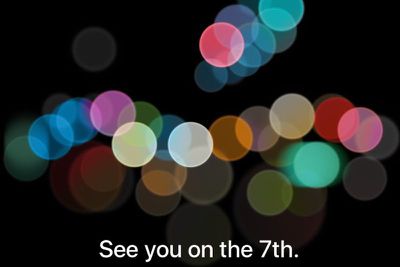 The fall 2016 event is expected to see the debut of the next-generation iPhone 7 and iPhone 7 Plus, which are rumored to feature improved cameras, better processors, and improved water resistance, implemented through the removal of the headphone jack and the introduction of a new flush, pressure-sensitive home button. Both devices are said to look similar to the iPhone 6s, with the same general size and shape, but with relocated antenna bands that no longer span the back of the devices.

Faster LTE and Wi-Fi speeds are rumored, as is a jump in storage space with 32GB positioned as the new minimum and a 256GB option rumored at the high end (possibly limited to iPhone 7 Plus). Display improvements first introduced in the 9.7-inch iPad Pro, including the True Tone feature able to adjust the display to match ambient lighting could be offered, and the larger iPhone 7 Plus is expected to have exclusive features like 3GB RAM and a dual-lens camera for crisper, brighter images.

Apple may use the event to debut a second-generation Apple Watch, said to include better waterproofing, an improved processor, and a built-in GPS chip. Design changes are not expected for the next-generation Apple Watch, but new materials and new bands are always a possibility. Apple rotates its Apple Watch band offerings on a regular basis and we expect to see new designs this fall.

Most of Apple's Mac lineup is due for an update, but the most highly anticipated machine, the MacBook Pro, will reportedly not be debuting at the event, coming later in the year instead. It's not known if other Macs will see a refresh announcement at the event, but it's unlikely, and we're also not expecting any iPad announcements at this time.

We will, however, get an update on the prospective launch dates of iOS 10, macOS Sierra, watchOS 3, and tvOS 10. We're expecting to see iOS 10 and watchOS 3 launch shortly ahead of the release date of the next-generation iPhone (rumored to be September 16 or September 23), while macOS Sierra could come a bit later, perhaps towards the end of the month. tvOS 10, as a new operating system, could launch alongside iOS 10 or alongside macOS Sierra.

In line with past events, the September 7 event will begin at 10:00 a.m. Pacific Time. As it has done with several past events, Apple is likely to stream the event live on its website and on the Apple TV. MacRumors will also be providing full event coverage, both on MacRumors.com and through our MacRumorsLive Twitter account.

Update: Apple has announced it will indeed be live streaming the event.

pika2000
Just to save everybody's time, this will the course of events of the forum

"Boring I will keep my [insert previous iPhone version]"
"Apple is not innovating anymore"
"I am switching to Android because I am bored."
"So expensive. I can buy China phone for 1/3rd of the price."
"Stupid Apple. Website is hanging/crashing."
"My pre-order is in. How about you guys?"
"Mine is shipping! Here's the screenshot."
"Out of stock? Stupid Apple. I'm buying Android."
"Does anybody know if I can just walk in to store [insert Apple store location] and buy one?"
"My iPhone has [insert minor blemish], I am returning it. Apple is going downhill."
"I just bought this new iPhone. What a ripoff. I hate Apple."
*repeat when t = September 2017
Score: 66 Votes (Like | Disagree)

sniffies
What a blurry photo. Terrible.
Score: 38 Votes (Like | Disagree)

ck2875
I always love seeing the graphics for these invites. Whoever's job it is to come up with unique ways to render the Apple logo does an outstanding job and I can only imagine how much they love what they do.

(Sorry for not following MR comment etiquette by saying something positive about Apple)
Score: 32 Votes (Like | Disagree)

Malexander86
Obviously we'll be hearing a lot about the new cameras. Looking at the prominent bokeh... possibly fine-control and fun effects with depth of field allowed by the dual camera system?
Score: 27 Votes (Like | Disagree)

so, it's time to hear everyone's theory as to what the image is secretly telling us.

It's telling us that Apple is losing their focus.
I'll be here all week.
Score: 26 Votes (Like | Disagree)