Today's iOS 10 update includes more than 100 new emoji with expanded gender options for a wide range of activities and professions, allowing users to choose a man or a woman when expressing themselves through emoji. 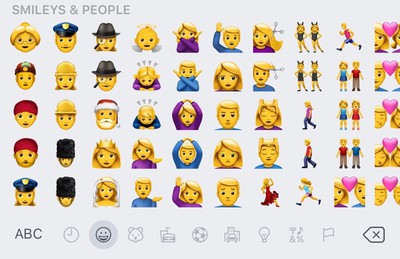 More than one hundred new and redesigned emoji characters will be available to iPhone and iPad users this Fall with iOS 10. This exciting update brings more gender options to existing characters, including new female athletes and professionals, adds beautiful redesigns of popular emoji, a new rainbow flag and more family options.

The new emoji come following changes to Unicode implemented in July by the Unicode Emoji Subcommittee, which include male and female versions of 33 existing emoji. The change also included a range of new professions from scientist to doctor to cook, but Apple does not appear to have added these.

iOS 10 beta 4 is currently available for developers and can be downloaded from the Apple Developer Center or over-the-air on devices running previous iOS 10 betas. Apple will likely release a new public beta containing the emoji later this week, and a worldwide public release will come in the fall alongside new iOS devices.

kolax
Great, two of everything.

Better pick the right one or be called sexist.

Can we not just go back to gender neutral emojis where it was all simple?
Score: 55 Votes (Like | Disagree)

fhall1
Sad what Apple is now....watchbands and emojis...but no new MBP hardware
Score: 34 Votes (Like | Disagree)

RobCoenen
Even though it sounds strange, this is the best way to have everyone update their phone to the latest software.
Most of the people I know don't care about their software version, but when I told them the middle finger emoji was included in iOS 9.1, everyone started to update their phones.
Score: 33 Votes (Like | Disagree)

Paradoxally
I would have much rather had a bacon emoji, but hey, you can't win them all.
Score: 30 Votes (Like | Disagree)

My much younger coworkers love emojis. They text all day long.

Adam-Jobs
What is this world coming to...
Score: 21 Votes (Like | Disagree)
Read All Comments