Apple today released the seventh beta of macOS Sierra, the newest operating system designed for the Mac, to developers and public beta testers. macOS Sierra beta 7 comes one week after the release of the sixth beta and two months after the software was first unveiled at Apple's 2016 Worldwide Developers Conference.

Developers and public beta testers can download today's update through the Software Update mechanism in the Mac App Store. Developers can also download the beta from the Apple Developer Center. 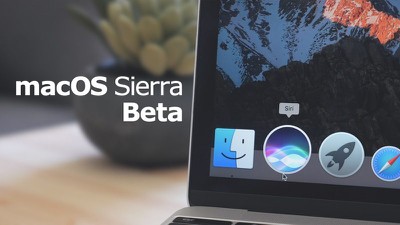 Subscribe to the MacRumors YouTube channel for more videos.
macOS Sierra is currently available to developers and public beta testers, and it will see a wider public release this fall. For full details on all of the new features included in macOS Sierra, make sure to check out our macOS Sierra roundup.
[ 153 comments ]

This doesn't seem to run all too smoothly for it. Windows 7/10 already runs a lot quicker than El Cap as it is, sadly.

Do you have an SSD? El Cap runs like El Crap on a spinner. But max out the RAM, throw in an SSD, and you're laughing.
Score: 15 Votes (Like | Disagree)

Do you have an SSD? El Cap runs like El Crap on a spinner. But max out the RAM, throw in an SSD, and you're laughing.

Yeah, an SSD is the most bang for the buck upgrade for those old machines.

What was the right thread for that response? :confused:
Score: 13 Votes (Like | Disagree)

Does it really make it feel like a new computer? Thanks.

Razeus
Too bad there's no new rMBP to go with it. School started and I had to go with Dell XPS 15. Sorry Apple. I don't know what you guys are doing all day, but it's definitely not Mac.
Score: 7 Votes (Like | Disagree)