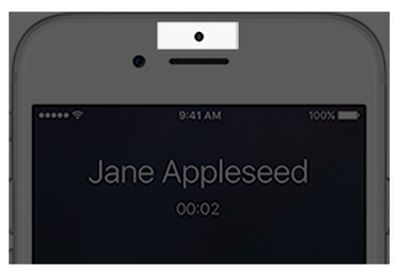 511 Innovations, Inc. is the latest patent troll to file a complaint against Apple with the U.S. District Court for Eastern Texas, claiming that the iPhone's proximity sensor infringes upon five of its patents.

The asserted patents¹, filed between 1999 and 2012, relate to various methods for measuring optical characteristics of an object, such as color spectrums, translucence, gloss, and position detection.

511 Innovations is a Texas-based non-practicing entity that does not appear to sell any sensor-related products, but instead seeks to enforce its patented technologies through litigation. Eastern Texas is a common district for patent holding firms to target larger companies like Apple, which has fought similar lawsuits from VirnetX, Dot 23, VoIP-Pal, and others in recent years.

The small firm acquired the asserted patents in 2013 from JJL Technologies, which claims to have sold world market-leading spectrophotometers, according to court documents filed electronically this week. It then licensed the patents to Spectral Sensors, whose website has been "under construction" since 2013. Further complicating things, JJL Technologies had acquired the patents itself from LJ Laboratories.

511 Innovations has demanded a jury trial and is seeking damages in the form of a reasonable royalty, plus interest and fees, in addition to a permanent U.S. sales ban on iPhones and all other infringing products and services.

... why? This will only set precedent for more scummy patent trolls. And they won't just target Apple, but the whole industry. This drains resources, thus slowing innovation. We'll all lose.
Score: 37 Votes (Like | Disagree)

Because Apple is a patent troll too. It's called karma.

Did somebody clubbed your parents to death with an ipad or something?
Score: 19 Votes (Like | Disagree)

Wow. Only recently returned to the comments on MR after hiatus and this is why. I don't know what the answer is, most newspaper sites, twitter, etc., have a similar problem in that the comments section for MR has turned primarily into a outlet for some very angry, disillusioned folks rather than intelligent or interesting discourse. For a tech site, MR does seem to have a bigger problem than most.
Score: 10 Votes (Like | Disagree)

macfacts
I'm sure Apple has tons of car patents but where is its iCar? People throwing the word patent troll haven't offered how to change the system. Do people seriously want it so if you are poor and have an awesome patentable idea, you can't patent it because you can't hire a factory to make the product? So only rich people can patent stuff? Insane.
Score: 7 Votes (Like | Disagree)
Read All Comments