While most of the WWDC 2016 keynote was focused on iOS 10, macOS Sierra, and new versions of tvOS and watchOS, Apple also made a number of CarPlay-related announcements during the two-hour presentation.

First, the new Apple Maps appearance on iOS 10 and some new features extend to the dashboard. If there is a lot of traffic ahead, for example, CarPlay will now proactively provide you with alternate routes and estimate how much time you saved compared to your original route.

Additionally, CarPlay turn-by-turn directions will now be available directly in your instrument cluster in vehicles equipped with a driver-side peripheral screen for a safer driving experience.

Another feature that should make CarPlay safer is the Siri SDK. Apple is opening Siri up to developers, enabling third-party apps for VoIP calling and more to work seamlessly with the virtual assistant, and the functionality extends to CarPlay.

Siri on CarPlay will support VoIP calls like Skype, which is not yet available in the car
CarPlay apps can now be rearranged or hidden on iOS 10 by tapping on Settings > General > CarPlay > Your Vehicle. Simply tap the add or subtract button on the stock or third-party apps that you want to add or remove. Phone, Music, Maps, Messages, Car, and Now Playing cannot be removed.

CarPlay apps can now be rearranged or hidden on iOS 10 (Image: 9to5Mac)
Just like on iOS 10, Apple Music has received a makeover on CarPlay that makes it easier to browse and discover music. The top menu options have changed from For You, New, Radio, Playlists, My Music, and Now Playing to Library, For You, Browse, Radio, and Now Playing. Curated playlists have also been added.

Apple Music has received a makeover on CarPlay (Image: 9to5Mac)
CarPlay is also now supported on ultra-wide screens. The new features and improvements will require pairing an iPhone 5 or later on iOS 10.

caliguy
Give us Waze support!
Score: 17 Votes (Like | Disagree)

Mac21ND
Why is it that I just want to punch Eddy Cue?
Score: 8 Votes (Like | Disagree)

calvz
I recently bought a new car with CarPlay and for the most part I really like it. But every time I use it I have a decision to make - am I going to run Apple Maps through CarPlay or just use Waze on my phone (I still have a vent clip)? If I try to run Waze through the phone, CarPlay actually makes things more convoluted because what's on the car screen has to be on the phone screen. This actually makes for a more dangerous experience. Apple needs to open CarPlay up to 3rd party nav apps.
Score: 5 Votes (Like | Disagree)

Why is it that I just want to punch Eddy Cue?

Perhaps you weren't loved enough as a child, or frustrated with your life and want to be able to take it out on someone who is successful and happy? It's hard to know without more detail, but most likely this isn't the best location for you to find help and resolution on your anger issues. Sending you best wishes!
Score: 5 Votes (Like | Disagree)


Am I the only person in the world that thinks this UI is ugly? There's nothing here but icons and text. And why the hell did they transfer the ugly home button of a phone into a digital icon at the bottom left of a car entertainment deck?

Simple UI = easy to read in moving vehicles. Do you really need to stare at fancy fonts and icons while driving?
Score: 5 Votes (Like | Disagree) 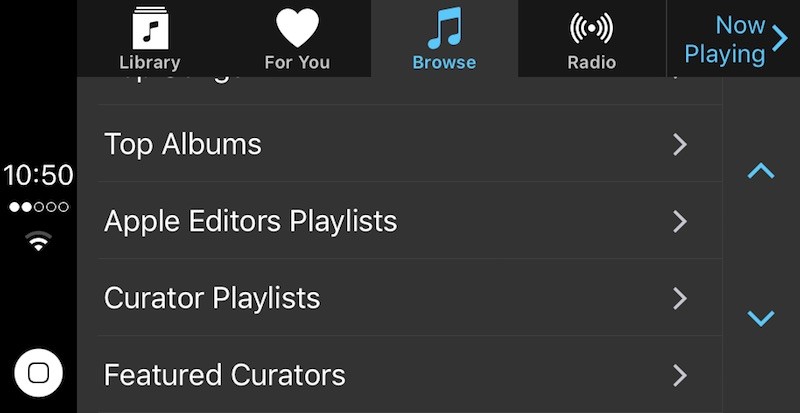 Am I the only person in the world that thinks this UI is ugly? There's nothing here but icons and text. And why the hell did they transfer the ugly home button of a phone into a digital icon at the bottom left of a car entertainment deck?
Score: 4 Votes (Like | Disagree)
Read All Comments