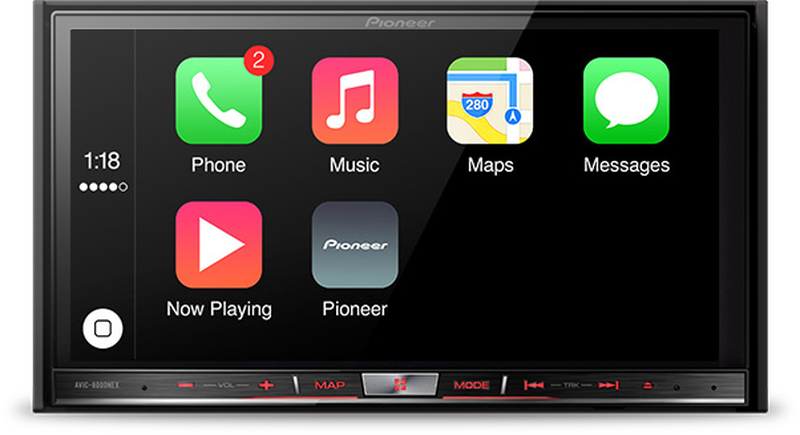 Pioneer's website does not distinguish what the differences are between its new NEX systems and existing AVIC-8100NEX, AVIC-7100NEX, AVIC-6100NEX, AVIC-5100NEX and AVH-4100NEX models, which remain available for sale. The 7-inch in-dash units continue to support Siri Eyes Free and Google's rival Android Auto platform.

CarPlay, available in a wide range of 2016 vehicles, provides hands-free or eyes-free access to Maps, Phone, Messages, Music, Podcasts and third-party apps including Spotify, iHeartRadio, CBS Radio and MLB At Bat. The software uses Siri and interfaces with your vehicle's knobs, dials and buttons for safer access to common iPhone features.

neotorque
As a current (Alpine) CarPlay user, the people waiting for wireless are wasting their time. For 98% of drives, you want to be plugged in anyway, just for battery life reasons.

Yes, for very short drives, it would be nice to have wifi/Bluetooth autoconnect as an option, but if you get your stereo installed by any decent place, they should be able to wire it so that the plug is right in your center console so plugging it in is as simple as inserting your key. It honestly does not put me out one bit.
Rating: 6 Votes What really cheeses me off is that if you have a decent recent-model car (say, 2012 or 2013), your car doesn't have Carplay and never will, but the factory sound system is integrated such that you also can't upgrade it with one of these units.

I for example just bought a 2013 Volt, and despite technology galore, there's not only no Carplay, but not even Siri eyes-free (that is, a button that will activate Siri on a connected phone). Plus, the Bose "premium" sound system falls short of my previous 2003 vehicle that I stuck a half-decent used Pioneer deck and some modestly-priced Pioneer speakers in. And I could have upgraded that vehicle to Carplay if I'd wanted.

Basically, you pay hundreds if not thousands of dollars over base price for a vehicle that doesn't even have rudimentary software upgrades after it ships, no ability to adapt to future technological developments (like Carplay), and doesn't even sound all that good.

It's one thing to buy a $800 phone with a ~4 year usable lifespan that you can't upgrade (although you do get free software upgrades, so it actually does everything it can to keep up with modern devices); it's another entirely to buy a $35,000 vehicle with a 10+ year usable lifespan in which they made sure you can't install a new stereo, can't modify it to handle new technology, you don't get anything but absolutely-necessary bug fix software updates, and all you get in exchange is the ability for the car to adjust the volume based on speed and some steering wheel controls.

Ironic that cars 10 or more years older than current-model ones now can be upgraded with much better mobile connectivity than the fancy new cars ever will.


I replaced my factory radio (2012 Chevy Silverado) with a CarPlay unit last year. While cars 15 years ago were much easier to upgrade, modern vehicles are not that difficult. Project took a long afternoon, but most of that time was spent adding a backup camera and routing the wire back to the cabin. Integrated the factory steering wheel controls and reprogrammed the call button to activate Siri. I can read specs, too. I also know the difference between an OLED and and LCD screen, and what it means. But unlike you, apparently I also have experienced using the device in question and the fact that the pixels are backlit makes absolutely no difference at night.


This just means that your tolerance to stray lights at night is higher than mine, or you otherwise care about it less, which fine. Good for you. Bad for me at the moment.

However, to say that it "makes absolutely no difference at night" is just factually wrong. With OLED screen, a totally black screen produces 0 light. With LCD screen, a totally black screen produces >0 light - and in most cases a very perceivable amount of light. Some LCD are better than others, but it doesn't change the fact that some light is always produced by a LCD screen which is on. When displaying something simple, like the time, an OLED screen produces only the exact amount of light necessary to light up those very specific pixels, and not one lumen more. An LCD screen produces more light than necessary by it's very nature because it has to light the entire screen no matter what is shown - thus it can't produce less light than an OLED. Indeed, the only time an LCD screen is not producing more light than an otherwise similar OLED screen is when the screens are fully white, when both screens produce equal light, in every other instance the OLED screen produces less light.

oneMadRssn
Seems OLED would be ideal for automotive applications. One of the things I hate about all these touch-screen headunits is that even at night on their dimmest setting, the backlight is still too bright and it lights up even a totally dark screen. It would be nice if it only lit up the pixels that need to be lit up.
Rating: 2 Votes

My friend Timothy is in the $1000 handphone business. He's having a blast.
Rating: 2 Votes

Seems OLED would be ideal for automotive applications. One of the things I hate about all these touch-screen headunits is that even at night on their dimmest setting, the backlight is still too bright and it lights up even a totally dark screen. It would be nice if it only lit up the pixels that need to be lit up.

CamiMR
As others have said, no Wireless CarPlay no go for me... Hopefully the next Alpine unit will have it.
Rating: 1 Votes
[ Read All Comments ]