While car manufacturers have been slower than anticipated to roll out support for Apple's in-vehicle CarPlay system, Pioneer and Alpine have delivered aftermarket options in the form of in-dash systems with CarPlay compatibility and large touch screens.

MacRumors has had a chance to spend some time with Alpine's iLX-007, which carries a suggested retail price of $800 but commonly sells for $600 and offers a 7-inch capacitive touch screen that dominates the unit's front. The only other physical features come as a thin row of buttons along the bottom edge, including a pair for controlling volume, one for activating Siri, one for returning to the Alpine home screen, and another pair serving varying functions such as changing tracks, depending on the app currently in use.

The basic Alpine home screen offers access to only a handful of functions including traditional radio, any peripheral devices connected to the system's auxiliary input including support for a rear back-up camera, and CarPlay devices. Upon connecting the unit's Lightning cable to an iPhone, the CarPlay interface automatically launches, allowing access to the standard Phone, Music, Apps, Messages, and Now Playing apps, as well as any CarPlay-compatible third-party apps the user has installed on his or her device and a Top Menu button to return to Alpine's main home screen. 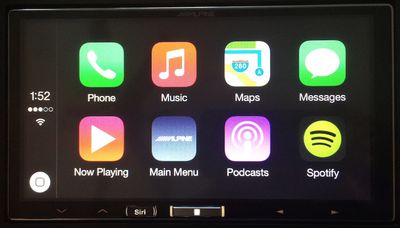 In order to provide support for Siri input, the iLX-007 comes with a microphone that can be mounted in an appropriate location such as the driver's sun visor in order to pick up voice commands. CarPlay-specifc app settings within the main iLX-007 interface include the ability to set microphone level and noise reduction, as well as which speakers Siri's output come through.

With just a narrow row of physical buttons along the bottom of the head unit, Alpine has certainly maximized the available screen space on the iLX-007, squeezing in a 7-inch display that makes it easy to see content. The small physical buttons can, however, be a bit difficult to easily find by touch while keeping eyes on the road. The large icons and other interface elements inside the CarPlay interface itself are easy to hit, although the lack of tactile feedback means at least a glance is probably needed to ensure the correct area of the screen is being touched.

As is to be expected, the CarPlay functionality on the iLX-007 is essentially the same as on other CarPlay systems, several of which have already been reviewed. The simple integration of having much of the phone experience appearing directly on the dashboard display in an easy-to-use format is a welcome addition, although certain aspects of the implementation leave something to be desired.

One fairly significant drawback that appears to be due more to Apple than Alpine is the lack of full support for multi-touch or even fluid scrolling input. While Apple may prefer to limit multi-touch availability in order to potentially reduce driver distraction while pinching or making other gestures that require a more extended glance at the dashboard display, scrolling is a much-needed feature for areas such as lists of contacts, music, and podcasts.

The iLX-007 clearly supports swiping input as seen in its own top-level settings (albeit with somewhat poor responsiveness), but within CarPlay users are essentially relegated to a more cumbersome method of paging through lists. A form of scroll swiping is supported on some lists such as in the Music and Messages apps, but swipes simply serve the same function as page up/down buttons and do not allow for smooth scrolling. Other apps entirely lack what would feel like natural swiping actions. Maps, for example, does not support swiping or pinching to pan or zoom maps.

CarPlay certainly shows a lot of promise, and it will only become more useful as additional third-party apps become compatible with the feature over time. For now, however, a main obstacle is getting CarPlay into users' cars. Despite initial promises of a handful of car manufacturers shipping new vehicles equipped with CarPlay-compatible entertainment systems this year, only Ferrari appears to have met that goal as others have had to push their plans into 2015.

Likely more important to the immediate potential success of CarPlay is the availability of aftermarket products that will allow users to retrofit their existing cars with CarPlay-enabled systems for a few hundred dollars. Alpine and Pioneer have indeed met their goals of launching CarPlay systems for their customers, and for now they are the means by which most consumers will be able to experience CarPlay in their vehicles. These aftermarket systems aren't particularly cheap, but with resellers offering lower-end models in the $450-$600 range, they are within reach of a decent number of consumers.

rolsskk
As much as I want to love it, Car Play seems to be another Apple TV - something that was a neat idea and has great potential, but is never taken seriously by Apple.
Score: 14 Votes (Like | Disagree)

Chrjy
Gotta say it doesn't look that great...aesthetically it could definitely look better, I appreciate it is supposed to be a simple layout for obvious reasons but even so...
Score: 9 Votes (Like | Disagree)

Runespeaker
I had one of these installed in my car by a local car stereo shop last weekend. They did a great job, but by the time I had them add a backup camera and the necessary controller to make the steering wheel buttons work, it got pretty pricey! :eek:

That's okay, as it was my Christmas present to myself. :) And so far I'm really enjoying it. I picked the Alpine over the Pioneer 4000-NEX because that one was junked up with a zillion awfully designed features and interface elements I would never use, and had a worse touch screen and no dedicated Siri button. (It did have HD radio, though, which would have been nice.) The Alpine is better for me because it is a radio plus CarPlay plus a nice screen, and that's it. Much more elegant and Apple-like. Plus, the dedicated Siri button is great to have, as it's very easy to find and press while driving.

Overall, CarPlay works great and is easy and fun to use. Siri generally figures out what I want. I've been using maps, sending texts, making calls, and listening to music on my iPhone 5s. Oh, and radio, too. :p I would love to see CarPlay continue to expand and get more features and third party apps, so I hope Apple will remain committed to it. We'll see how my gamble pays off.

A few more notes for anyone considering one of these:

* Lack of Bluetooth is a non-issue. It's super easy to plug in your phone when you get in the car, and that gives you a great connection and charges the phone as well.
* You can listen to radio and use maps at the same time. I wasn't sure of this so checked before I bought the unit. It's not HD radio, though.
* The microphone is an external unit that needs to be mounted somewhere in your car, like by the rear view mirror.
* Adding a backup camera and integrating with your steering wheel controls will dramatically increase the cost, but it makes the unit feel much more integrated with your car.
* Lack of scrolling and panning is a little odd, but does seem like a conscious decision. It doesn't really harm usability. It's easier to ask Siri to play a certain song or artist rather than scroll through a list.
Score: 8 Votes (Like | Disagree)

Tankmaze
For 600 dollars I rather use ipad air 2 and put it on the dash connect it with the 3.5 mm jack. But thats just me :D
Score: 6 Votes (Like | Disagree)

And have to pull it out of the car every time you stop to keep from getting your car broken into? No thanks.
Score: 4 Votes (Like | Disagree)

Gotta say it doesn't look that great...aesthetically it could definitely look better, I appreciate it is supposed to be a simple layout for obvious reasons but even so...


I agree. It should look and feel like iOS (carry over iPhone backgrounds, user preferences). Apple needs to come out with a car stereo/media center. This 3rd party stuff doesn't cut it for me.


After only a few full days of deliveries I found that the phones battery died quickly when you use it for directions. I also found that when you absolutely need directions, you can suddenly loose your signal. That happened a few times when I really needed to know where I was.


A simple car charger will solve your problems.
Score: 4 Votes (Like | Disagree)
Read All Comments

Tuesday January 24, 2023 1:11 pm PST by Joe Rossignol
While the new Mac mini with the M2 chip has a lower $599 starting price, the base model with 256GB of storage has slower SSD read and write speeds compared to the previous-generation model with the M1 chip and 256GB of storage. A teardown of the new Mac mini shared by YouTube channel Brandon Geekabit reveals that the 256GB model is equipped with only a single 256GB storage chip, while the...
Read Full Article • 529 comments