The CEO of Chinese conglomerate LeEco has called Apple's product design "outdated" and "obsolete" in an international TV interview, following the company's unveiling of its first self-driving supercar in Beijing last week (via CNBC).

Jia Yueting is both CEO and chairman of LeEco (formerly LeTV), often referred to as the "Netflix of China", but which has a product range that spans smartphones, TVs, mountain bikes, and now electric vehicles. The 43-year-old entrepreneur began his career as a tech support worker before building his own IT and mobile company, estimated to be worth around $4.8 billion. The Chinese media company is also a strategic partner with US-based electric vehicle company Faraday Future (FF). 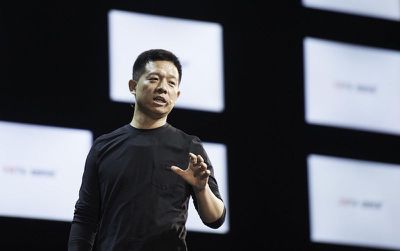 LeEco CEO Jia Yueting (Image: Imaginechina)
The company's smart LeSEE supercar was unveiled with much fanfare at a Beijing event last week. The self-driving car has a steering wheel that folds away and screens that offer up in-car entertainment for passengers. LeEco aims to outdo Tesla's Model S with its supercar, and also aims to bring LeSEE owners into its ecosystem by supplying them with in-car movies, TV shows, and music.

Jia spoke at a meeting of the China Entrepreneur Club, an exclusive summit of business leaders, where he explained why competition in the Chinese market from the likes of Apple did not worry him.

"We think the difference between us and Apple is very large. Apple is a mobile phone company focused on hardware and software," Jia said. "LeShi [another name for LeEco] is focused on the internet first, and only then on software, and finally on hardware."

Apple only has individual apps. This was the right choice during the first generation of mobile net, when CPUs and the mobile network speeds were not fast enough. However now we're moving into the next era of mobile internet, these problems no longer exist. Moreover, having separate apps just means great obstacles in the user experience. We hope to break down these obstacles.

One of the most important reasons [for slowing sales] is that Apple's innovation has become extremely slow. For example, a month ago Apple launched the iPhone SE. From an industry insider's perspective, this is a product with a very low level of technology. We think this is something they just shouldn't have done.

As an industry leader, Apple should be developing more cutting-edge products. The iPhone was still a leader five years ago after being launched in 2008 but now the concept has fallen behind.

We believe the next generation of mobile internet will be more open, more ecosystem oriented instead of being a closed loop. Ironically, Apple's over-dominance, lack of internet-thinking and the closed off nature of its systems, all hindered innovation in the internet mobile industry.

Apple Car rumors have gained momentum since early last year, when The Wall Street Journal reported that Apple has hundreds of employees working to develop an electric vehicle under the codename "Project Titan." The bulk of research and development may be taking place in secretive buildings in Sunnyvale, California, where late night "motor noises" have been heard in recent months, while one report claimed that Apple may have a facility in Berlin, too.

drumcat
Guy making an electric car says Apple shouldn't make a 4-inch phone. Clearly, Apple has no idea what it is doing because it's making over 90% of the industry's profits.

chrisbeach
Blow-hard CEO with nothing but a concept car criticises design credentials of an unrelated but prominent company known for its excellent design.

This isn't news, MacRumors - please don't give this guy the oxygen of publicity for his non-product.
Score: 56 Votes (Like | Disagree)

brendu
If Apple design was so outdated, why do so many companies continue to copy it year after year?
Score: 39 Votes (Like | Disagree)

LeShi [another name for LeEco] is focused on the internet first, and only then on software, and finally on hardware.

Not inspiring that an aspiring car maker considers hardware of least importance.
Score: 29 Votes (Like | Disagree)

ButteryScrollin
"We believe the next generation of mobile internet will be more open, more ecosystem oriented instead of being a closed loop. Ironically, Apple's over-dominance, lack of internet-thinking and the closed off nature of its systems, all hindered innovation in the internet mobile industry."

Pbrutto
Rigggggghhhhhttt......this guy is from the country that closes down bookstores and music websites....perhaps this country is obsolete
Score: 24 Votes (Like | Disagree)
Read All Comments