Apple today updated its investor relations page to note the earnings announcement for the second fiscal quarter (first calendar quarter) of 2016 will take place on Tuesday, April 26 instead of Monday, April 25 as was previously announced last month.

It is not clear why Apple has moved the date of the earnings call by a single day, but it will now take place next Tuesday instead of next Monday. 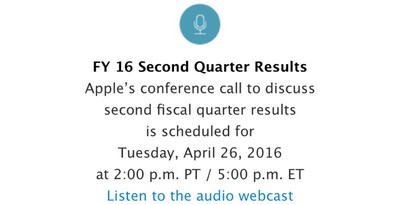 The earnings release will provide a look at sales of the iPhone 6s, 6s Plus, and SE following Apple's record first quarter, which saw the company announce 74.8 million iPhone sales and $18.4 billion profit on $75.9 billion in revenue.

Apple has warned that iPhone sales will decline in the March quarter and has provided Q2 2016 guidance of $50 to $53 billion in revenue and gross margin between 39 and 39.5 percent. Should Apple only take in $50 to $53 billion, the company will see its first year-over-year revenue drop in 13 years.

Update: According to Apple, the earnings call is delayed because of a memorial service for Bill Campbell, who passed away earlier this week.

How much does Apple spend per year? Does a decline in revenue like that actually matter for Apple? They seems to already have more money than they know what to do with.

Apple has enough money in their cash reserves to buy all ten aircraft carriers currently operating in the US navy (assuming aircraft carriers were for sale) with enough left over to build a Saturn V rocket and launch a mission to the moon. I wouldn't know what to do with that much money either.

You know, besides trying to buy a fleet of aircraft carriers and land some employees on the moon. Do we know if Tim Cook has a suggestion box somewhere?
Score: 10 Votes (Like | Disagree)

Rogifan
So a story about Apple moving earnings call by one day will now turn into an apple is doomed thread because... Sigh.
Score: 7 Votes (Like | Disagree)

henryaaron
I don't like the new "corporate" Apple, with all their profit-oriented ideas and pushing products and customers to the back seat. I liked the anti-corporation style Steve Jobs had.

And I don't think Tim Cook was right for CEO.

Disclaimer: This is not a typical Apple is doomed, Steve Jobs was everything type comment. I'll reason with anybody about why this is fact-based.
Score: 4 Votes (Like | Disagree)

AxoNeuron
If anyone deserves a revenue drop, it's definitely Apple. The fact that they are selling 16GB devices in the year 2016 is preposterous. It was fine in 2011, but seriously, it's been five years now.
Score: 4 Votes (Like | Disagree)

apolloa
I like how this story has got it right and only mentions the iPhone as that's all Apple makes these days.....
Score: 4 Votes (Like | Disagree)
Read All Comments

Sunday May 16, 2021 2:39 pm PDT by Eric Slivka
The Browse tab in the Music app across Apple's platforms has started displaying a prominent teaser hinting at an upcoming major announcement for Apple Music. Under the heading "Coming soon," the headline says "Get ready – music is about to change forever." An accompanying "Tune-In Video" simply shows an animated Apple Music logo. Rumors have indicated that Apple is preparing to launch a...
Read Full Article • 116 comments

Thursday May 13, 2021 5:26 am PDT by Tim Hardwick
For as long as it's existed, Google Photos has offered free unlimited storage for uploading images at a reduced yet good enough quality for most users. From June 1, 2021, however, all photos and videos uploaded to Google accounts will count against users' cloud storage. If you've been relying on Google to back up your media library, it may be time to move that content elsewhere. This article...
Read Full Article • 110 comments