We've already seen several alleged part leaks for the next-generation iPhone 7, and now Chinese site Digi.tech.qq.com [Google Translate] (via HDBlog.it) has shared images of what is believed to be the battery that will be included in the device.

The battery lists a capacity of 7.04 watt-hours, slightly larger in capacity than the equivalent battery capacity listed for the iPhone 6s (6.61 watt-hours) and almost identical to the iPhone 6 (7.01 watt-hours). Voltage is not visible on the alleged iPhone 7 battery, so the exact charge capacity is not yet available, but should be similar to the iPhone 6 battery. 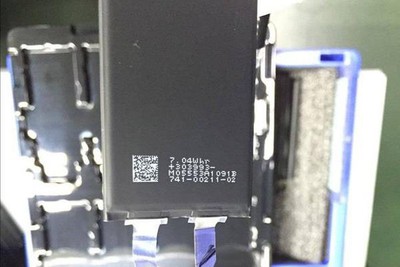 Rumors suggest the iPhone 7 and 7 Plus will be thinner than existing iPhones, with Apple perhaps making room for the similarly-sized battery by eliminating the headphone jack and cutting down on the extra space around the Lightning port.

While we still have several months to go before the iPhone 7 debuts, we've already heard a long list of rumors about the device and we've seen multiple part leaks. The iPhone 7 is said to include a faster A10 chip, a Smart Connector, up to 256GB storage space, stereo speakers, no headphone jack, a thinner design with no rear antenna bands, a faster LTE modem, and dual cameras in the iPhone 7 Plus model.

stephen1108
Apple is so uncompromising with their obsession on thinness...

We REALLY wouldn't mind if the device were as thick as the previous generation model, with a bigger battery inside.
Score: 66 Votes (Like | Disagree)

bgraham
Samsung listens to its customers with the S7, and then Apple just ignores them and does the complete opposite. Are they serious?
Score: 30 Votes (Like | Disagree)

i hate how i am turning more and more into one of those complainers but there r so many reasons Apple gives me nowadaya
Score: 26 Votes (Like | Disagree)

Andres Cantu
Don't worry guys, they will come to the rescue with a battery case for the iPhone 7 with a thinner bulge ;)
Score: 20 Votes (Like | Disagree)

sunapple
People want larger batteries? Just lower the capacity and up it again next year. No one will notice.
Score: 18 Votes (Like | Disagree)

Shirasaki
Those combined leaks convince me that:
Buying iPhone 6s Plus is still a good choice.
In addition:
- Removing headphone jack is a no-no. And I don't want an adapter, thank you.
- I hate a thin device. iPod touch 6th gen is thin enough, but the feeling when holding it at hand is often strange.
- I want a larger battery.
Non of those above could iPhone 7 deliver to me. 6s Plus at least is thick enough, and it has a headphone jack.
Score: 12 Votes (Like | Disagree)
Read All Comments

Sunday May 9, 2021 2:00 am PDT by Sami Fathi
Zoom, a hallmark platform used by millions during the global health crisis, has been given access to a special iPadOS API that allows the app to use the iPad camera while the app is in use in Split View multitasking mode. This case of special treatment was first brought to attention by app developer Jeremy Provost, who, in a blog post, explains that Zoom uses a special API that allows the...
Read Full Article • 334 comments

Monday May 10, 2021 10:41 am PDT by Juli Clover
Apple's upcoming iPhone 13 models will be slightly thicker than the iPhone 12 models and will also feature larger, thicker camera bumps with lenses that protrude less, according to iPhone 13 schematics seen by MacRumors. The new iPhone 13 and 13 Pro models are expected to feature a thickness of 7.57mm, up from 7.4mm in the iPhone 12 models. That's an increase of 0.17mm, which won't be hugely ...
Read Full Article • 148 comments