In a new video from Unbox Therapy, YouTuber Lewis Hilsenteger shares a hands-on look at third-party cases intended to fit both the iPhone 7 and iPhone SE. Assuming they are based on accurate designs, the two "leaked" cases in the video appear to confirm previous rumors about each iPhone, including the removal of the 3.5mm headphone jack in the iPhone 7 and an iPhone SE form factor that is very similar to that of the iPhone 5 and 5s.

Hilsenteger starts by comparing the supposed iPhone SE case to an iPhone 5, finding that the sixth-generation iPhone generally fits well into the iPhone SE case, with one minor discrepancy in the alignment of the volume buttons on the side of the device. This is most likely due to the expected design tweak on the 4-inch iPhone SE, which is rumored to adopt the curved-edge glass of recent iPhone models rather than the flat glass and sharper chamfered edges of the iPhone 5 and iPhone 5s.


He then moves on to comparing the iPhone 7 case with one for an iPhone 6s, noticing a "much larger opening" for the smartphone's camera. While an iPhone 6s fits almost perfectly inside the new iPhone 7 case, the cutout fails to align with the camera of the iPhone 6s and extends noticeably farther down.

Current rumors state that a possible dual-camera system would be exclusive to the larger iPhone 7 Plus, and while the cutout on this smaller-screened iPhone 7 is larger than on the current model, it appears more likely designed for a larger single-lens camera than a dual-lens camera. Rumors have been inconsistent about whether the iPhone 7 rear camera will be flush with the rear shell continue to protrude slightly as on current models.

The bottom cutout of the iPhone 7 case also appears to corroborate previous rumors that the next generation of iPhone will cease support for the 3.5mm headphone jack and move onto a universal Lightning cable solution for charging and music playback. Similar to a leaked case image from earlier in the month, the bottom section of the case has cutouts for possible stereo speakers with a Lightning adapter set in between.

When Hilsenteger attempted to place a 3.5mm headphone plug through the speaker cutout while the iPhone 6s was placed in the case, he confirmed it was in fact too slim of an opening to successfully connect the headphones. 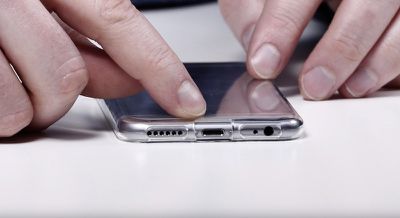 Renderings from Feld & Volk, which worked from leaked designs of the iPhone 7, suggested that the iPhone 7 might also be substantially thinner than the iPhone 6s. In Unbox Therapy's video today, however, it appears the current model of iPhone fits snugly into the iPhone 7 leaked case, suggesting any reduction in thickness would be very minor.

Apple is expected to reveal the iPhone 7 during an event in its usual September timeframe, but the 4-inch iPhone SE is expected to be one of the centerpiece devices at the company's March 21 'Let Us Loop You In' spring event. The company today launched a new live events app on the tvOS store to get fans ready for the live streaming event from the new Apple TV on Monday.

1Zach1
So someone took rumors from rumor sites, created cases from them, calls them leaks, then the rumor sites call it proof of their rumors the case is based on?
Score: 23 Votes (Like | Disagree)

AbSoluTc
I really dislike this guy. He really rubs me the wrong way.
Score: 18 Votes (Like | Disagree)

Lewis got a lot of flak for his iPhone 6 bend video but I love his channel, he's a really funny guy and very open-minded about tech. This got me really excited about the iPhone 7 :cool:

SSD-GUY
Anyone else not read the "case" bit in the title and get really excited?
Score: 14 Votes (Like | Disagree)

dannyyankou
Hey, Macrumors, if I make a case based on rumors of what the iPhone 7 will look like, will you feature it on the front page?
Score: 11 Votes (Like | Disagree)

DJ Dilbert
Not really impressed, I would like to see some real innovation like Apple used to do. Lately it's just been subtle improvements to existing hardware. The bigger phone wasn't really an innovation because we all wanted that. I'm talking about the updates that we "didn't know we wanted" but saw it and then wanted it. The types of innovations that set Apple way ahead of the competition.
Score: 9 Votes (Like | Disagree)
Read All Comments

Monday November 28, 2022 10:42 am PST by Juli Clover
Apple has cut back on its Twitter advertising, according to Twitter CEO Elon Musk. In a tweet, Musk said that Apple has "mostly stopped" its Twitter ads, asking if Apple hates "free speech." Musk went on to publish a poll asking if Apple should "publish all censorship actions" taken that impact customers and he began retweeting content from companies that Apple has had moderation discussions ...
Read Full Article • 1426 comments