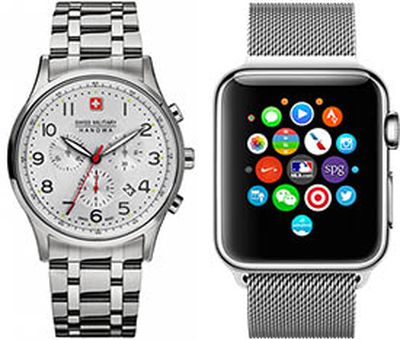 The latest data from Strategy Analytics reveals that the Apple Watch remained the most popular smartwatch through the fourth quarter of 2015, capturing 63 percent global market share based on an estimated 5.1 million sales in the three-month period.

Samsung trailed in second place with 16 percent market share and an estimated 1.3 million sales. Apple and Samsung together accounted for 8 in 10 of all smartwatches shipped worldwide during last year's holiday shopping season, based on the data.

Global smartwatch sales rose to an estimated 8.1 million units in the fourth quarter of 2015, an increase of 316 percent from 1.9 million in the year-ago quarter. The growth was led by North America, Western Europe, and Asia.

The record-breaking smartwatch growth contrasted the troubled Swiss watch market, which declined 4.8 percent in Q4 2015 over the year-ago quarter. Swiss watch sales totaled 7.9 million units in Q4 2015, down from 8.3 million in Q4 2014.

“The Swiss watch industry has been very slow to react to the development of smartwatches," said Neil Mawston, Executive Director at Strategy Analytics. "The Swiss watch industry has been sticking its head in the sand and hoping smartwatches will go away. Swiss brands, like Tag Heuer, accounted for a tiny 1 percent of all smartwatches shipped globally during Q4 2015, and they are long way behind Apple, Samsung and other leaders in the high-growth smartwatch category.”

Apple does not break out Apple Watch sales in its financial earnings results, but rather groups the wrist-worn device under its "Other Products" category with iPod, Apple TV, Beats, and accessories revenue.

Early rumors suggested an "Apple Watch 2" would launch this spring, but it now appears that Apple's much-rumored March 15 event will focus on smaller Watch updates, including new bands and perhaps another fashion partner like Hermès.

predation
analog watch > smart watch all day for me.
Score: 27 Votes (Like | Disagree)

wikiverse
People might purchase an Apple watch instead of a Swiss watch for now, but the Apple watch is essentially a disposable. After 2 years, the battery won't work, a new version will be released with new features, and the overall design will change as fashion trends usually do.

But after dabbling in the 'smart watch' arena, many (not all) people will go back to just wanting a classic timepiece that looks good with casual and formal attire, and isn't the same watch as a 16 year old high school student's.

There is room in the world for both of these types of products and they're not really in competition.
Score: 20 Votes (Like | Disagree)

xnu
Only time will tell.
Score: 14 Votes (Like | Disagree)


Also I love how when Apple is in the lead, Samsung is "trailing" with the smaller marketshare. But in an article earlier today no such language is used for global smartphones. Just amusing. I don't care much other than to point out the amusement.
Score: 13 Votes (Like | Disagree)

joe-h2o
This comparison seems a bit off. I mean, should Rolls Royce and Aston Martin be worried that their market share is small compared to BMW and Mercedes because they sold a lot of 5 Series and CLKs (who in turn should worry about Ford selling a lot of F-150s and Fiestas)?

I know that smartwatches (and apple in particular) are trying to position themselves as luxury purchases, but they're not the same market as Swiss watches.

People who want an analogue timepiece with a mechanical movement are always going to be out there. They might even also buy a smartwatch!
Score: 13 Votes (Like | Disagree)

Care to elaborate how?

Mechanical watches suck even at their only function: telling the time.

I'm a collector since 1993 (my first Rolex was a Pepsi Rolex GMT Master), but the Apple Watch is now on my wrist Every. Day. I'm actually enjoying it more and more (bought it on release, imported from Germany).

My Rolex (et al.) collection sleeps in a bank safe, and I'm going to actually start to sell it, as prices will tank.

Well I think you answered your own question. The mechanical watch is a collectible with a value associated with it. For others it is a status symbol, why else would someone wear something so expensive that does the same thing that a $18 casio watch does? Please note that I own my fair share of mechanical watches, including my Rolex which I wear every day, but I don't kid myself that I wear it for any functionality. It's for that reason that mechanical watches, especially expensive ones, will NEVER be in trouble. There is always someone waiting in line to get the next status symbol.

Plus the Apple watch is FUGLY as hell, every time I see it I'm amazed that a company like Apple actually released it.
Score: 7 Votes (Like | Disagree)
Read All Comments

Sunday February 5, 2023 6:07 am PST by Joe Rossignol
Apple has discussed selling a new top-of-the-line iPhone alongside the Pro and Pro Max models in 2024 at the earliest, according to Bloomberg's Mark Gurman. Based on this timeframe, the device would be part of the iPhone 16 lineup or later. In a September 2022 edition of his weekly "Power On" newsletter, Gurman said there was "potential" for an iPhone 15 Ultra to replace the iPhone 15 Pro...
Read Full Article • 446 comments