A new drawing of the unannounced iPad Air 3 highlights the dimensions of the device, with the potential for the third generation iPad Air to have similar dimensions as the iPad Air 2 (via Engadget). According to the image, the iPad Air 3 will be 6.15 mm thick and 169.6 mm wide, meaning the new tablet would end up about 0.05 mm thicker and 0.1 mm wider than the iPad Air 2.

Since the dimensions are so close to one another, and factoring in the possibility for rounding and measurement errors, it's a good possibility that the iPad Air 3 will be around the same size as the second generation iPad Air tablet. 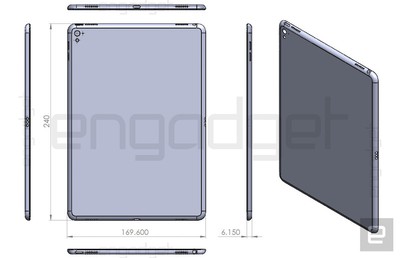 Image via Engadget
Today's drawing also supports previous rumors surrounding the iPad Air 3's potential features, including a four-speaker design to boost audio quality in the same vein as the iPad Pro. A Smart Connector port can be seen on the side of the device, which would give the new iPad support for accessories like a Smart Keyboard. Previous case leaks and rumors for the iPad Air 3 have been less consistent on the inclusion of a Smart Connector, with some showing a cutout for the accessory port and some not.

The sketch also supports the rumored addition of a rear-facing LED flash onto the iPad line, which would make the iPad Air 3 the first of Apple's tablets to get the feature.

At the company's September event last year, only the iPad mini received a refresh, along with the debut of the iPad Pro. Due to its elongated lifespan, the iPad Air has been rumored to get its own update during the first half of 2016, potentially at a March media event.

RamGuy
Seems like Apple is responding to the downward spiral of the iPad sales by going all out on this new iPad Air model.
They are adding about everything they possibly can, if it comes with support for Apple Pencil and fully featured A9X it will be a beast.

But will that change anything? I guess the Pencil part will make Apple sell more units, but the big problem with iPad sales is that each model is simply too good. I know a lot of people with iPad 2 and they still find them to more than good enough for what they use it for. They will all grab themselves a new iPad down the road, but not until the one they already have is falling in some way or another.


Compared to the iPhone, the iPad is considered a secondary devices or a "luxury" device they can't afford to replace as often as their primary and most personal device being their phone. Combine that with the fact that iPad has been so great for so many generations whereas most people do not feel any real need for upgrading even their old iPad 2's, Apple will have a really hard time making people upgrading these as often as Apple would like them to.

Apple is also to blame in terms of the software. The home screen and the utilisation of the screen real estate is getting really long in the tooth. I do understand that Apple do not put much attention to the home screen and the whole "springboard" as users spend 99,99% of their time within actual apps so what's the real point in wasting time on changing the home screen / springboard when users are only seeing it for a split second while their launch one of their apps.

But looking at the iPad Air, and especially iPad Pro those huge icons with tons of wasted space between them is getting rather ridiculous.
Score: 6 Votes (Like | Disagree)

Yelmurc
I just want it to be able to use the Apple Pencil. The rest is just gravy.
Score: 5 Votes (Like | Disagree)

puma1552
Based on those pics, it's going to be ANOTHER year of the super boring 2012 iPhone 5 chamfered edges?

Please Apple, leave the chamfered edge design in the past, time to get with the program and update the design language. This should look like an iPhone 6/6S with curved glass. Spare me the spiel about curved glass for swiping on your phone, you can do that on the iPad too.

I refuse to update my Air 2 until there's actually a fresh design from a cosmetic standpoint. Adding speakers and a flash to the existing design doesn't count - I want something entirely new to look at.
Score: 4 Votes (Like | Disagree)

Aluminum213
Just give me pencil support
Score: 3 Votes (Like | Disagree)

smizzle
Interesting that there is still a headphone jack on this. Why would they keep it on the iPad but drop it from the phone?
Score: 3 Votes (Like | Disagree)

33man
Soon they will sell the I-weight to give some weight to their products to avoid them flying away upon a breeze...

Owning an ipad 3 and a mini 2, this version with 4speakers sounds interesting but will it be overpriced?
Score: 2 Votes (Like | Disagree)
Read All Comments