Apple has announced that its 33rd retail store in China will open in Qingdao, a port city bordering the East China Sea, on Saturday, January 30 at 10:00 a.m. local time. The store will be located in the new MixC luxury shopping mall, the largest in China, on 6 Shandong Road in the city's coastal Shinan District. 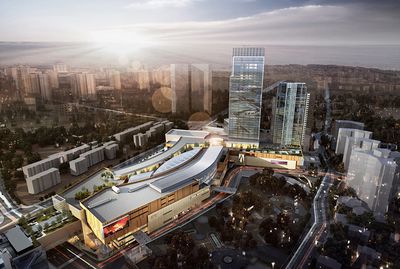 A render of the MixC shopping mall in Qingdao, China
MixC Qingdao is an expansive plaza with over 400 popular fashion stores, dining restaurants, cafes and entertainment facilities, including an indoor theme park with a rollercoaster. The mall also includes an Olympic size ice skating rink and the most expensive cinema in China with IMAX and 4D.

Apple has aggressively expanded in China under the leadership of retail chief Angela Ahrendts, with new stores in Xiamen on January 14, Shenyang on January 9, Nanning on December 12, Beijing on November 28 and Chengdu on November 21. Apple also opened stores in Chongqing, Hangzhou, Hong Kong, Nanjing and Tianjin in 2015.

China is Apple's second biggest market by total revenue after the Americas. The company experienced 99% year-over-year revenue growth in Greater China, which includes China, Taiwan and Hong Kong, in the fourth fiscal quarter of 2015. China will likely eclipse the U.S. as Apple's biggest market by 2017 if the growth continues.

Even if a slowdown is coming in China: Apple (still) has more stores in California than in all of Greater China. That doesn't add up given recent revenue trends.

I think growing to around 50 stores is the minimum considering China is now the second-biggest market for Apple - and the country is slow to embrace online sales (apparently not a lot of margin for Apple products for third-party online platforms):

If anything, I think Apple has more than enough stores in the U.S. but is still lagging in other important regions:

I think SE Asia will become the most important growth region for Apple (e.g. India following in China's footsteeps sooner or later).

More stores should be opened in Asia imo, lots of (young) people entering middle class over the coming decades.
Score: 5 Votes (Like | Disagree)

If China goes then we all go so there isn't any risk.
Score: 3 Votes (Like | Disagree)

Apple has aggressively expanded in China ('https://www.macrumors.com/2015/01/15/ahrendts-china-expansion/') under the leadership of retail chief Angela Ahrendts

Anyone else feel this is very risky given the current economic climate in China?
Score: 2 Votes (Like | Disagree)

Well how have the U.S. Apple stores done during the various recessions that Apple has been through? Or how about all of the Apple stores in Europe which just went through a huge recession that extended much longer than in the U.S.

A total collapse is one thing, but if China just goes through a normal recession (even a bad one) I think Apple will just sell more and more stuff as they open more and more stores. Now the growth might be less than it would be in a boom, but it will still be growth. And Qingdao has 2.7 million people in it. I think it and its surrounding areas can support one Apple store.
Score: 2 Votes (Like | Disagree)

I suppose they don't have anywhere better to expand into.
Score: 1 Votes (Like | Disagree)
Read All Comments