Last Friday, Tim Cook and representatives from other Silicon Valley companies met with White House officials to discuss how to counter the use of social media by terrorist groups to recruit new members. In that meeting, Cook criticized the White House for its stance on encryption, reports The Intercept. 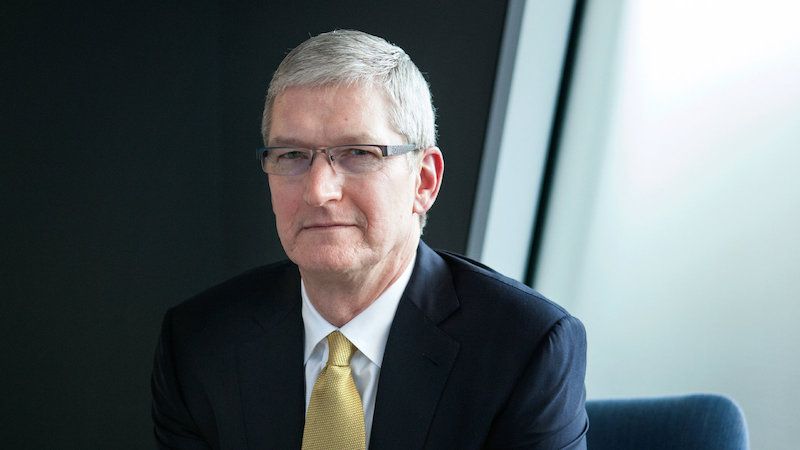 Apple CEO Tim Cook lashed out at the high-level delegation of Obama administration officials who came calling on tech leaders in San Jose last week, criticizing the White House for a lack of leadership and asking the administration to issue a strong public statement defending the use of unbreakable encryption.

Cook told the White House officials that the administration should "come out and say 'no backdoors'" in encryption. The Apple CEO has repeatedly said that backdoors in any sort of encryption create an opening for bad guys to access the private information of consumers.

Attorney General Loretta Lynch responded to Cook by saying a "balance" between privacy and national security was necessary, and that the balance is continually discussed and debated within the administration. Terrorists use encrypted communication apps to recruit and mobilize members, according to a White House briefing document for the meeting obtained by The Intercept.

Last February, Cook spoke about the importance of privacy and security at the White House Cybersecurity Summit. Last month, he spoke to 60 Minutes and once again reiterated Apple's stance for no backdoors in encrypted technologies and how it's important for the company to protect its users' personal information.

logicstudiouser
It is really sad that a private corporation has to lecture the government about constitutional protections.
Rating: 30 Votes

Amazing Iceman
What the government wants to do is not going to solve the problem:

High-end encryption technology already exists.
Even if current encryption gets downgraded and crippled with a backdoor, the bad guys could just re-implement better encryption on their personal devices, even get new devices made in China for their purpose.

Also, there are many ways to conceal hidden encrypted messages inside media files; files that would be ignored by security filters. No government has the power and hardware to filter, search and decode these hidden messages on the fly.

And finally, poor security could be used by the bad guys to conceal their activities, involving innocent people by secretly accessing their devices to commit their crimes.

bmunge
This idea of a government/law enforcement accessible back door is completely absurd and only exists in the minds of those who have no understanding of the underlying technology. It's ridiculous that it's even a discussion. Leave the technology to the technologists, not the politicians.
Rating: 13 Votes

MH01
This is about control , and giving yet away more civil liberties with "terrorism" as an excuse.

Everyone should have a very hard time accessing our personal data. Encryption should be more sophisticated in this digital age.
Rating: 12 Votes

fitshaced
I don't see how the attorney general can claim there to be balance in the discussions around encryption and that those balanced discussions are ongoing when the privacy of citizens is constantly being eroded at the wishes of the government. Once they take something away, there is no getting it back.
Rating: 9 Votes

Porco
If you outlaw good encryption, the only people who will have good encryption are the outlaws. That doesn't protect all us innocent citizens, it puts us at greater risk.
Rating: 8 Votes

MacGizmo
"Backdoors will allow the Government to keep us safe." Uhh, I've seen that movie before... it was called:
"TSA agents and metal detectors will keep people from bringing dangerous items on air planes"

The results: A new mother can't bring 8 ounces of bottled breast milk on a plane, but any jackass can sneak a 5 inch blade or zip gun on a plane with little effort... as long as he is willing to wait in 2 hour security lines at the terminal.

Back doors in software/hardware won't keep us safe from anything. All it's going to do is allow the government to spend hundreds of millions of dollars to create departments and committees that track the companies and back doors and give congress something to bloviate about every election season.
Rating: 8 Votes

I sincerely appreciate it

Is it theoretically possible for client 1 to server and then server to client 2 encryption and only companies use a filter provided by government to flag anything in their server?
I'm not suggesting companies should adopt this.


sounds possible to me, but then that is a ton of unencrypted data going through the companies server
Rating: 7 Votes

High-end encryption technology already exists.
Even if current encryption gets downgraded and crippled with a backdoor, the bad guys could just re-implement better encryption on their personal devices, even get new devices made in China for their purpose.

Also, there are many ways to conceal hidden encrypted messages inside media files; files that would be ignored by security filters. No government has the power and hardware to filter, search and decode these hidden messages on the fly.


Bingo, if the government wants to put backdoors into everything they'd have to arrest/disappear anyone with an encryption/linguistics background only to deal with banning overseas devices which aren't "crippled". Those of us who grew up during the Cold War had relatives or knew someone who came from a Communist country, after 2000 in some cities they have black sites to disappear people without access to a lawyer and not charged with a crime are slowly mirroring what happened in Soviet Union & East Germany.

There are ways to decode hidden messages on the fly, run a pixelation scan looking for abnormal compression points/file sizes or audio filter media files. Locally there is a weird Russian number station, within the "noises" if you run them through an audio tool there are coded messages in those bursts of noise. I don't speak Russian but a friend of mine has listened to some recordings and started to look at the audio wave forms which lead to an observation the noises are in a pattern.

Weakening security only makes products worse off as other countries will have greater goals of trying to find those backdoors and exploit them. Recent Juniper security hole was used by governments to spy on companies/businesses, who knows what goes on with "re-routed" purchased Cisco hardware that got tampered/modified by the government and shipped to businesses.

Way things are going the US is slowly devolving into the Soviet Union.

I'm torn. I don't want terrorist to attack anyone and if reading their encrypted messages saves just one innocent life then maybe.

BUT the NSA and other government organizations have proven that no one can handle all that power. Plus, as a law abiding citizen, I'd prefer no back doors to ensure my encrypted communications remained private as I'm not doing anything illegal.


Have you ever read the Snowden leaks? They have databases to pull up all your emails, what if an error incorrectly confuse you with someone with a similar name or some person decides to be the opposite of Snowden by using it as an identity theft wet dream or selling info to tabloids? Maybe you never knew anyone who were snagged into McCarthyism witch hunts. Former Senator Ted Kennedy got on a no-fly list, it took him two years to get off that list but the average US citizen can't/won't know why and under the gun laws you're suspected of being an evildoer.

In the UK they want to ban encryption, would you enjoy banking & shopping on low-grade or non-secure terminals or on the computer?

...may as well avoid using American/British developed products in the name of security.
Rating: 6 Votes

heimo
I think also every house and apartment should have backdoor installed, and key given to government. It'd improve safety. It could be used in emergencies. What could go wrong?
Rating: 5 Votes
[ Read All Comments ]

• $399 'Apple AirPods (X Generation)' Show Up in Target Inventory List (46)
• Top Stories: Apple Event in March With iPhone 9, iPad Pro With 3D Sensing, and More? (30)
• The EU Wants All Phones to Work With Interoperable Chargers, Here’s What That Means for Apple's Lightning Port (475)
• Make Your AirPods Case Look Like a Game Boy With This New Cover (31)
• Apple Maps Expands 3D Street View Feature to Boston, Philadelphia, and Washington, D.C. (38)
• Google Testing New Double-Tap Gesture on Back of Pixel Phones for Launching Camera, Assistant, and More (58)
• T-Mobile and Sprint Aiming to Close Merger as Early as April 1 (63)